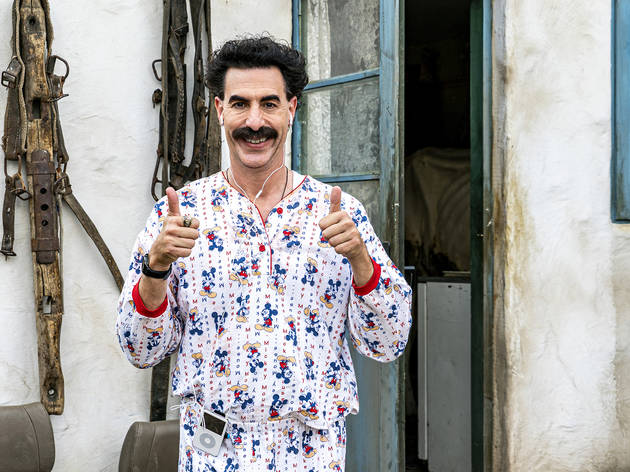 Back in 2006, Sacha Baron Cohen upscaled his racist Kazakh journo Borat Sagdiyev from TV sketch shows to the big screen and hit big. Borat raked in $128 million at the US box office, picking up a Golden Globe and an Oscar nomination. Kazakhstan was not amused, but everyone else was. This surprise sequel takes things back in the opposite direction: it’s a 90-minute comedy with maybe enough great material for a few sketches.

The America to which Borat returns, fresh from the gulag, is, of course, an unrecognisable place 14 years on. Donald Trump, whose New York tower was the scene of an impromptu Borat poo in the first movie, is president. Rudy Giuliani is a discredited figure of fun rather than a 9/11 folk hero. And the racist, antisemitic underbelly has spilled out from the country's waistline.

All this has two knock-on effects on the excellently titled but inconsequential Borat: Subsequent Moviefilm: firstly, the startling social insights that drew awkward laughs from the first film are gone. Want to gawp at white supremacists flaunting their Nazi ideology at a rally? Turn on the news. Somehow, the sight of Borat leading a group of Texans in a chorus of ‘Covid is a liberal hoax’ has lost its capacity to shock. That’s how far we’ve come – or gone – and it’s hard to lampoon.

Baron Cohen also has to contend with the $128 million worth of Americans who watched the first film and who flock to Borat in hero worship in early scenes, robbing him of the surprise factor. The film leans into this via a continual pursuit of amusing disguises but it yields few big laughs, bar his hayseed creation Country Steve. Some of the set-ups either fall flat (a riff that has Borat sending SMSs via fax gets tired fast) or miss the mark entirely (an encounter with a Holocaust survivor).

The plot sees Borat’s 15-year-old daughter Tutar (Maria Bakalova) along for the ride this time, a gift from Kazakhstan to ‘Vice Pussy Grabber Michael Pence’ designed to claw back some national pride. The Covid lockdown kicks in halfway though, the pair are separated and Borat shacks up with a pair of hospitable QAnon types, passing the time sharing conspiracy theories, bashing coronavirus particles with a saucepan and walking around wearing a strap-on.

This being Sacha Baron Cohen, Subsequent Moviefilm is never going to be entirely shock-free. A scene that has Borat shopping for a cage for Tutar sets the tone for a movie that takes a scalpel to Trump-era America’s easy relationship with acute sexism. A jaw-dropping sequence at a debutante ball shows up a clutch of pervy Texans in the presence of their daughters and sets the scene for the film’s biggest gotcha moment.

Of course, it’s Trump loyalist and rentagob Rudy Giuliani who falls furthest into Borat’s trap when he agrees to an interview with a dolled-up and flirty Tutar. But as with a lot here, it feels like a bit of a nothingburger: Giuliani comes over as sleazy and inappropriate but the trouser-fiddling footage falls short of incriminating. For the film, it’s a bit six degrees of separation from anyone who matters in the run-up to the US election. Giuliani is hardly Pence and Pence is hardly Trump. And, sad to say, Borat is hardly Borat anymore.

What are the funniest movies ever made? Here’s our pick of the 100 greatest comedies.