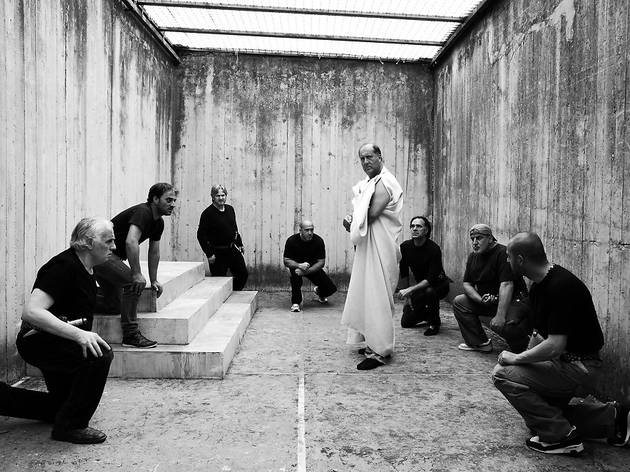 Hardened Italian lags putting on Shakespeare’s ‘Julius Caesar’ in a maximum security jail proves fertile ground for a slippery and suprisingly endearing drama about masculinity, role-playing, levels of reality and the power of art in this delightful, concise film from veteran Italian directors, the Taviani brothers.

‘Caesar Must Die’ begins and ends with colour footage of a grizzled all-man troupe, all flabby bellies and exposed moobs, putting on a play in a theatre in Rome’s Rebibbia prison. It’s arresting to see this grizzled bunch in robes and wielding wooden knives, but you wouldn’t want to spend too long in this am-dram scenario. We then pull back a few months to see straight-to-camera auditions with these men, and black-and-white footage of them rehearsing Shakespeare’s play, and it becomes much more interesting.

This isn’t a documentary, but at times it feels like one, which adds to a nagging sense of uncertainty about what it is we’re watching. Very quickly the rehearsals move from formal sessions, with a director present, to scenes in which the prisoners act out scenes at length in the cells, corridors and yards they’re familiar with. Shakespeare’s lines merge with real talk, and you can see the prisoners reflecting on the meaning that the mob who killed Caesar in this same city has in the context of their confined, entirely male and perhaps violent lives.

Effectively, the prison becomes the setting for ‘Julius Caesar’, although the boundary between the play and the prisoners’ world always remains blurred. We presume these prisoners are playing versions of themselves, and we know their names, ages, lengths of sentences and crimes, which range from drug trafficking to murder. But how far are they inventions of the Tavianis just by the act of being in a drama? More importantly, there’s the question of how embracing this play is changing them: there’s a lovely, melancholic postscript in which a prisoner says that his brush with art makes him feel more imprisoned. (Is this thought a sort of liberation, though?)

There are moments of reflection, such as when a prisoner rubs his hand along a seat in the theatre and wonders if a woman might sit there, and moments of tension, as when the actors playing Caesar and Decius lock horns while in character. It’s an arresting, playful and moving film, and it’s no surprise that a jury led by Mike Leigh (a director concerned with the bridge between the ‘real’ world and drama) awarded it the prestigous Golden Bear at the 2012 Berlin Film Festival.