Film, Comedy
Recommended
2 out of 5 stars 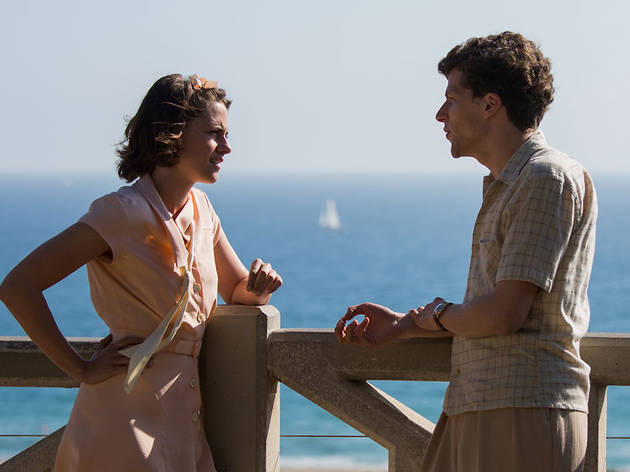 Woody Allen offers another clunky, underwhelming tale of romance in the Jazz Age

With the period romance 'Café Society', Woody Allen gives us a young Jewish man, Bobby (Jesse Eisenberg, fairly endearing as a Woody stand-in), who's burnt by love and glamour when he escapes the family business in 1930s New York and heads to LA to seek work from his uncle, Phil (Steve Carell), a high-rolling talent agent. Once there, Bobby falls hard for his uncle's secretary, Vonnie (Kristen Stewart), although her secret affair with Phil inevitably complicates their relationship.

The film is built on twin nostalgias: a nostalgia for 1930s Hollywood and a nostalgia for the comforts and foundations of home. It's a languid and clumsy film, not very romantic (the scenes between Eisenberg and Stewart are desperately flat) and even less funny, although it manages a wistful thoughtfulness in some of its later scenes. While Bobby flounders in Hollywood, back home his male relatives play out versions of what it means to be a man: his father is a homebody; his brother is a gangster; and his brother-in-law prefers wordy wisdoms to physical violence. Soon, Bobby is back among them: his dreams are faded, his skin is a little tougher and he's running a nightclub for his criminal sibling when he meets a new woman, Veronica (Blake Lively).

The 1920s and 1930s hold a special fascination for Allen, who visited these years with previous films including 'Radio Days', 'Midnight in Paris' and 'The Curse of the Jade Scorpion'. It's the world the 80-year-old was born into; a mirror he enjoys holding up to his recurring interests: why do we allow our ambitions to make a mockery of us? Why does love make us behave in such strange ways? Why can't we be faithful to ourselves and others? Here, he works for the first time with cinematographer Vittorio Storaro (Bernardo Bertolucci's longtime collaborator), and the Italian lends the film an easy-on-the-eye, light-filled beauty, leaning heavily on creams, yellows, browns and whites – yet there are moments when the sumptuousness becomes syrupy and over-bearing.

The soundtrack offers the expected jazz, plus a number of Rodgers and Hart songs, while Allen himself, now sounding slower and a little mumbly, offers an intermittent, awkward narration. 'Café Society' is a morose almost-comedy that lacks energy and focus and flirts with themes and then abandons them. In the pantheon of Allen's films, it's a pretty, rambling, minor distraction.