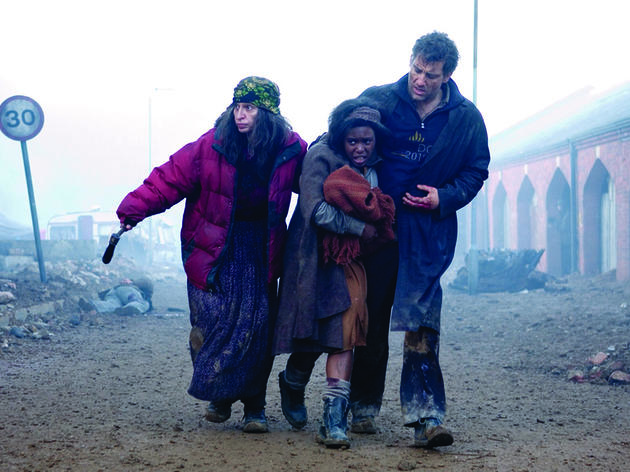 Mexican director Alfonso Cuarón once again proves his dexterity at turning his hand to different genres and subjects with this thrilling adaptation of a PD James novel, which is his first film since directing ‘Harry Potter and the Prisoner of Azkaban’ and his first screenwriting credit since his 2001 arthouse hit ‘Y Tu Mamá También’. Set in Britain in 2027, it’s a sort of sci-fi movie, but it’s the film’s nervous and energetic verité style, and creepy familiarity – not any wild vision of the future – that make it so involving. It helps, too, that Cuarón doesn’t allow the writing or the performances, most notably from Clive Owen and Michael Caine, to sink amid the film’s futuristic detail and pointed ideological concerns.

‘Children of Men’ is a clever and credible vision of London in the near future – a violent, paranoid, claustrophobic time when Britain is the only surviving nation, and a fertility crisis means that no babies have been born for 18 years. The Department of Homeland Security has ordered a militarised police to arrest all illegal immigrants and dispatch them to a fortified compound at Bexhill-on-Sea. Meanwhile, a rebel outfit of guerilla refugees (or ‘fugees’) known as The Fish loom threateningly in the background, fighting for the rights of illegal immigrants and determined to cause major unrest.

Cuarón’s smart trick is not to explain too much. Instead, he leaps straight in to his story, which is a good old-fashioned chase yarn that’s gilded with some unobtrusive and cheeky social commentary. It’s civil servant Theo (Owen) – hapless innocent, reluctant hero and middling everyman – versus a miserable world in which his activist ex Julian (Julianne Moore) continues to take a political stand that he’s long since abandoned. It helps that Cuarón’s prognosis of the future is gripping from the off. Theo (wearing a faded ‘London 2012’ sweater) is buying a coffee on Fleet Street when he notices a news report on TV. The newsreader (a voice recognisable from television today) announces that the world’s youngest person, 18-year-old Diego, has died in a street brawl. It’s major news. The public weep. Theo takes a day off. And it’s no leap of the imagination to connect the reaction to Diego’s death with the death of Diana in 1997. It’s a moment that’s symbolic of Cuarón’s film: the future is not another planet, but a familiar version of our own.

The focus on migrancy and terrorism has an uneasy potency (not least when a bomb blows up Starbucks), and signals Cuarón’s determination to avoid distancing sci-fi tropes. It’s a film that could have been ridiculous. When Theo finds himself unwitting guardian to the only pregnant woman on earth (Claire-Hope Ashitey), a Messianic tone threatens to infect the film, but Cuarón backs off from stressing the Biblical overtones of James’s tale; at one point, he pointedly pulls the needle off a solemn John Tavener number and returns to the din of conflict as immigrants battle it out amid Bexhill’s ruins.

In Cuarón’s hands, this film emerges as quite an achievement, both technically (look out for the impressive one-shot take that graces a battle scene late on; Cuarón resists the cut throughout) and dramatically (even Caine is amusing as Theo’s old mate Jasper, a cardigan-wearing, pot-smoking old sage). It’s the director’s boldness that makes it work. He doesn’t bother with easy explanations, choosing instead to plunge straight into the action, shooting in a frenzied, documentary style (always handheld) and employing only the most necessary of special effects. His London is ours. The same red buses crawl the streets, only they’re older and more tatty. It rains incessantly and, though the city’s grey buildings are now adorned with moving-image advertising, the majority of our cityscape endures, from Brick Lane to the gloomy fly-overs of the East End. There’s fun to be had from all this – zebras roam St James’s Park and Picasso’s ‘Guernica’ now hangs in a (finally!) refurbished Battersea Power Station. But this is no joke: this is as real and as provocative as the future gets on screen.