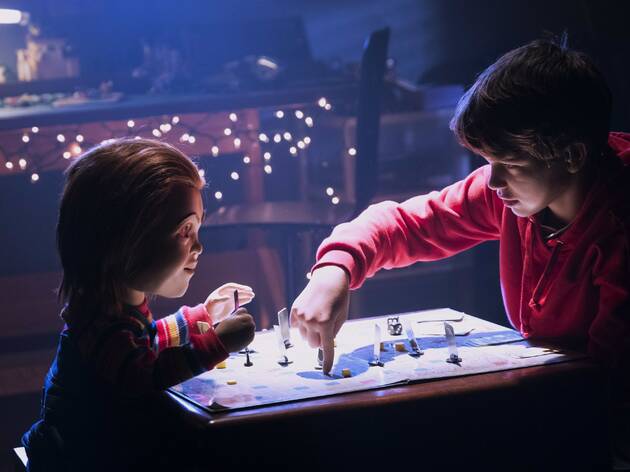 Mark Hamill lends his voice to the toy run amok, but what could have been a fan-savvy update reveals itself to be a plastic retread.

We’re not above enjoying a Chucky movie, provided it doesn’t feel like it was made by a cranky, overtired child. The original 1988 ‘Child’s Play’ and its six sequels (that’s not a typo) never pretended to be art. Still, there was solidity, craft, attempts at special effects, Jennifer Tilly being strange. Today’s rebooters, Norwegian director Lars Klevberg and scripter Tyler Burton Smith, don’t have the blessing of concept creator Don Mancini. While that might have foretold something adventurous, they’ve used their freedom to dumb things down even further. After an initial flurry of pitch-black, Verhoeven-esque satire – a computerised ‘Buddi’ toy is programmed to be murderous by a disgruntled Vietnamese factory worker – the film quickly settles into a routine of trashy kills, poor plotting, inept editing and a surprising lack of fun.

Not helping matters is dead-eyed snark source Aubrey Plaza, somehow less expressive than the doll itself (creepily voiced by Mark Hamill). She plays a wage slave at a generic big-box store who sneaks home a defective Buddi for her lonely kid, Andy (Gabriel Bateman). As single moms go, her character is conceived terribly – she’s vacant, unobservant and a bad judge of boyfriends. (Chucky’s subsequent rampage might have been more productively targeted at the screenwriter.) In this film’s universe, leering supers get table-sawed in the crotch: The kills are hard-R and splattery, something of a misjudgment. The remake’s one new idea, playing on our Alexa-tended automated interiors (with which Chucky can communicate), is poorly developed. Meanwhile, any anti-corporate digs at the ominous Kaslan Corporation were done better decades ago by ‘Halloween III: Season of the Witch’, an underrated sequel that disappointed horror fans when they were younger (but now delights them as parents). A girl in a pink dress gets her face sprayed with gore. That was the only funny bit.