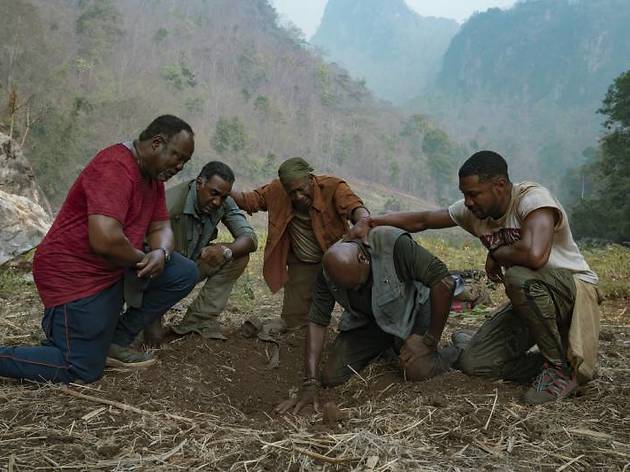 Spike Lee’s latest movie arrives just as America – and much of the world – is again searching its soul about racism and injustice. It feels like a movie conjured up for these times, a pointed entertainment for this moment – but that’s only because these moments keep recurring. It’s no accident that it feels relevant; it always would.

‘Da 5 Bloods’ is a maximalist portrait of four black Vietnam veterans, former US soldiers, arriving in Ho Chi Minh City to reunite and reckon with their past, while hoping to locate a stash of gold long lost in the Vietnamese jungle. For these four vets, it’s time to turn the American nightmare into the American dream, perhaps for political gain, perhaps for personal. For Lee, the director of ‘BlacKkKlansman’, ‘Miracle at St Anna’ and ‘Malcolm X’, it’s another reckoning with his country’s history – a movie with points to make about now, then and everything in between.

We move between these four pension-age men on a mission, Otis (Clarke Peters), Melvin (Isiah Whitlock Jr), Eddie (Norm Lewis) and Paul (Delroy Lindo), and their younger selves back in battle – moments for which Lee tightens the screen ratio and plunges us into a film within the film. Their bond is tight and affecting and warms the movie, even when they squabble (Lindo’s Paul is a Trump supporter, a shock to his pals). Their shared love for a long-fallen comrade, Norman (Chadwick Boseman), is a unifying force; they want to find his body and bring him home.

‘Da 5 Bloods’ is at once knockabout and violent, funny and deadly serious, carved from history and carved from the movies. There’s a spark of ‘Rambo’, nods to ‘Apocalypse Now’, and running through it is the spirit of adventure, both futile and meaningful, of an old-school western. Only it’s a western coloured by PTSD and the personal, political and emotional scars of a war in which a wildly disproportionate number of US soldiers on the ground were African-American. Lee’s point is clear: these men were screwed at home and screwed abroad.

The effect of the collage of all these pieces is that it’s unmistakably a movie by Spike Lee – a filmmaker unafraid of bold collisions of tone and style. There’s ample archive footage cut into the drama – Martin Luther King Jr, Angela Davis, Richard Nixon, Malcolm X, old images of protest, war and death – and the lines between past and present are blurred, especially as no de-ageing effects are used for the war scenes.

Some story strands come and go, some are convoluted or under-explored, some are moving and linger in the mind – Lindo’s performance as the most tortured and struggling of the group is the standout. Some of the minor characters, especially a group of European and American charity workers and a businessman played by Jean Reno, tend towards the toe-curling. It’s a picture that’s good-natured and angry at the same time, cluttered and full of life, as if channelling the energy and conflicted personalities and lives of these men, flawed but worthy of honour, heroes like the best of them.

Available to stream on Netflix now.