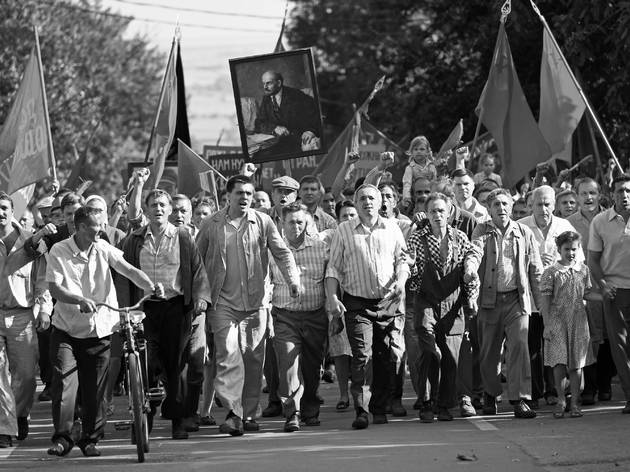 Far from the jaunty skewering of ideological purity its title might suggest, Dear Comrades! is heady with curdled idealism and bloody repression as it recreates a long-suppressed Soviet massacre that took place in 1962. The utopian dream of Soviet Russia is stripped away under director Andrei Konchalovsky’s steady gaze, while his period-faithful black-and-white compositions make every frame a pleasure to get lost in. At least, until you realise that they’re filled with cynical party men, grim-faced KGB agents and gormless apparatchiks, and sense their capacity for brutal violence. That exclamation mark, it’s fair to say, is doing a lot of heavy-lifting.

The film’s conduit into this teetering political edifice is Lyuda (Julia Vysotskaya), a local party official in the Russian town of Novocherkassk. We meet her nipping to the shops where her status lets her skip the long queues and pick up luxury items behind the counter. Food prices are going up and people are angry as well as hungry. Her daughter, Svetka (Yuliya Burova), works at the local factory where a strike is brewing in protest at an increase in production targets. Shit, as the old Soviet adage runs, is about to go down.

It’s a world where, to paraphrase ‘Animal Farm’, some animals are a lot more equal than others, and Konchalovsky expertly unpeels its political realities. Soon, the Napoleons and Squealers from higher up the chain of command are arriving to quell the protests, demanding to know why live ammo hasn’t been handed out to local soldiers and dishing out threats to Lyuda and her colleagues.

Depicted with real filmmaking flair and horrifying detail, the massacre itself is presented as the sum total of numerous bad decisions. But the fact that a cover-up begins almost as soon as the shooting has ended, with bodies loaded onto trucks and non-disclosure documents shoved in front of eye-witnesses to sign, is almost more damning. Lyuda’s ironclad faith in the system wavers as she sets about absorbing the horror and trying to find the missing Svetka, and veteran Russian actress Vysotskaya (coincidentally, born in Novocherkassk) is magnetic as a woman forced to choose between her family and the state.

Despite the subject matter, it’s not an overly heavy watch. Konchalovsky’s script (co-written with Elena Kiseleva) finds plenty of mordant humour in the Kafka-like contortions of the state and its lackeys. They’re a self-satirising mob given the odd nudge in the right direction, making Dear Comrades! a kind of straighter-laced cousin to The Death of Stalin. It makes for a handy companion piece to HBO’s dazzling Chernobyl, too. The later generation of Soviet politicians behind that even greater disaster in 1986 might have learned something from Novocherkassk. Had they even known about it.

Available on Curzon Home Cinema in the UK Fri Jan 15, and on VOD and Hulu in the US Feb 5.