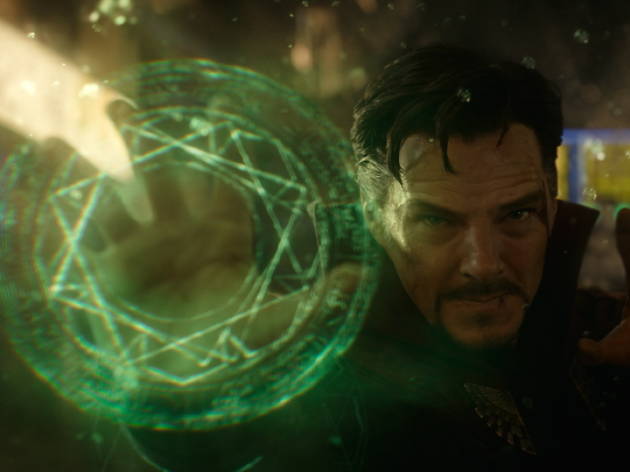 The Marvel-verse has never shied away from a bit of groovy psychedelia, from the prog-rock cityscapes of ‘Thor’ to Ant-Man’s voyage into cosmic inner space. But they’ve never gone full-bore down-the-rabbit-hole acid freakout – until now.

There are sequences in ‘Doctor Strange’ that could burn the top layer off your eyeballs, crammed as they are with some of the most unashamedly drug-inspired imagery since the ‘The Simpsons’ episode where Homer takes peyote. But problems arise when ‘Doctor Strange’ tries to tackle the everyday stuff, like telling a half-decent story.

Benedict Cumberbatch is all spite and ego as Dr Stephen Strange, a New York super-surgeon more interested in fame and fortune than saving lives. But when his hands are shattered beyond repair in a car crash, Strange heads to Kathmandu in search of a miracle cure. He ends up at the feet of The Ancient One (Tilda Swinton), a shaven-headed guru who promises to open his mind to the endless possibilities of this infinite universe. But first they have to deal with Kaecilius (Mads Mikkelsen), a preening psycho wearing digitally enhanced guyliner who’s trying (like countless other identikit villains before him) to open a portal into hell and reveal the secret of eternal life.

Kaecilius isn’t the only character in ‘Doctor Strange’ who could use a little rounding out. Our hero is a brittle, unlikeable snob, played by Cumberbatch as Sherlock with a funny accent, a sports car and slightly improved interpersonal skills. And he’s the closest we get to complex: Swinton is basically Yoda without the humour, while poor Chiwetel Ejiofor has nothing to do but stamp and scowl as her sturdy sidekick Mordo. The character we’re meant to care about, Strange’s ex-girlfriend Christine (Rachel McAdams), is just a blank.

Luckily, the 3D visuals compensate. From hurtling, ‘2001’-inspired intergalactic excursions to ‘Inception’-style city-folding antics in the ‘Mirror Dimension’, the film has a freewheeling, gravity-defying buoyancy that’s beautiful to behold. But it can all feel a little threat-free – it’s hard to sustain tension when literally anything can happen, and the constant need for reams of exposition to explain what the hell is going on doesn’t help.

Director Scott Derrickson (‘Sinister’) should be applauded for sticking to his guns. He promised ‘Doctor Strange’ would be ‘weird and wild’, and so it is, at least within the context of a major Hollywood blockbuster. If only he’d found a way to contain these giddy surrealist elements within a compelling, compassionate storyline.