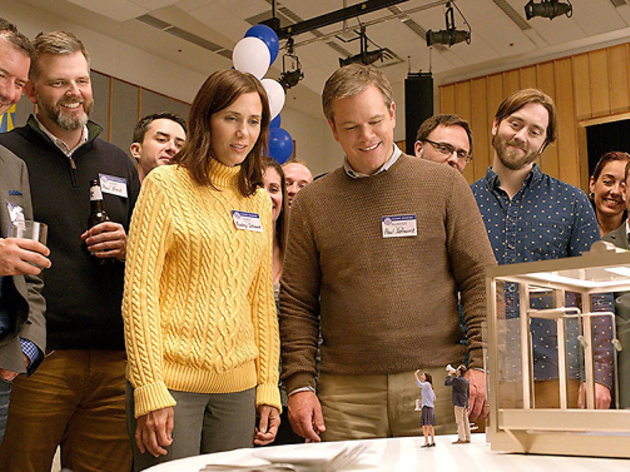 Matt Damon and Kristin Wiig co-star in a stature-challenged future-shock comedy that reduces Alexander Payne's bite to a pinch.

'I am big – it’s the pictures that got small,' Hollywood’s Norma Desmond spits out in 'Sunset Boulevard'. Now, 'Sideways' and 'Nebraska' director Alexander Payne (working with his longtime cowriter Jim Taylor) has found a way to make both the stars and the pictures small. 'Downsizing' is a self-satisfied sci-fi nothingburger that shies away from its early suggestiveness and goes as deep as your average 'Black Mirror' episode. Worse, it saps this usually formidable writing duo of its penchant for tartness. Miniaturisation – shrinking yourself down to enjoy a dawning new economy for the 'community of the small' – may be the way of the future in an equity-poor world, in which one can finally afford a McMansion or diamond earrings provided they’re roughly two-thousandths of the typical size. But the vicious satire you have in your head about diorama-dwelling haves versus huge have-nots never materialises. Downsizing your expectations will help.

Payne still loves skewering middlebrow banality (at least I hope that's what he's doing) and, after an early lab sequence that plays like a dorky update of 1966's 'Fantastic Voyage', the filmmaker brings on his best joke: the boyish face of Matt Damon. Damon’s sweet-natured Omaha dweller, Paul, already seems like an uncomfortably grown-up kid, so what difference is five more feet going to make? After watching an old school friend get wheeled into a class reunion in a fancy hamster cage (the guy’s just as chatty and popular), Paul and his wife Audrey (Kristin Wiig, not given enough to do) decide to investigate.

The strengths of 'Downsizing' echo some of the Borscht Belt gags of Woody Allen’s wryly anti-future 'Sleeper': Even after Paul makes the technological leap (which culminates grandly with the ding of a microwave), the doctors in his new eco-friendly luxury community of 'Leisureland' still mispronounce his last name. Later, while working a job as a phone salesman, Paul takes offense at a customer’s 'Don’t get short with me.'

As medium-grade satire (hardly another 'The Truman Show'), 'Downsizing' works fine enough. But it makes a series of wrong moves that throw off the delicate tone, raising the pretension levels to toxic. Two Eurotrashy neighbors (Christoph Waltz and Udo Kier, the latter playing a former yachtsman who purrs over his new toy boat) blur Payne’s critique on social climbing; they’re way too gaudy. Later, the introduction of a cringeworthy Vietnamese cleaning woman and ex-dissident ('Inherent Vice'’s Hong Chau) borders on broken-English caricature. The movie wants to get at bigger ideas about human extinction and the sustainability of 'perfect' communities, but it forgets the simplest thing, which is to show how the outside world would interact with these tiny jerks. Where’s the wider perspective? Lost up its own minuscule navel, 'Downsizing' is a film that gets around to a toothless variation on 'size doesn’t matter,' but Payne ought to know that's the most boring idea imaginable, big or small.