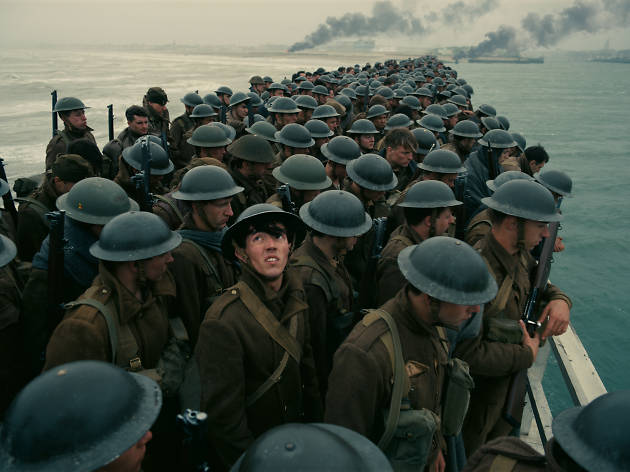 You might already know how the evacuation of Dunkirk in May 1940 turned out: how over 300,000 mainly British troops escaped from the beach and harbour of a northern French port while being bombarded by the Nazis. But the power of Christopher Nolan’sharrowing, unusual war film is that it tries hard, with real success, not to make any of this feel like just another war movie. Instead there’s a strong sense of this bloody, strange event unfolding in the unknowable way that those on the ground might have experienced it. It’s awe-inspiring and alienating, perhaps as it should be.

At less than two hours (brief for the director of ‘The Dark Knight’ films and ‘Interstellar’) and keeping dialogue to a bare minimum, ‘Dunkirk’ gives us a short, sharp dose of the oddness and horror of war, dropping us right into the fray. It’s a staggering feat of immersive terror, blessed with such knockout photography that it has to be seen on a massive screen if at all possible (Nolan shot the film in two large formats, Imax and 65mm). It looks, feels and sounds like a nightmare, balancing naked suffering (drowning, shooting, shelling, crashing, burning) with a strong hint of otherworldliness: Nazi propaganda leaflets spookily dropping from the sky; strange foam washing up on the sand, dislocating aerial shots of sea meeting land.

Nolan gives us three interlocking chapters, offering three different perspectives. There’s ‘The Mole, One Week’, taking place on the harbour wall from which thousands were rescued and where we see a commander (Kenneth Branagh) trying to make sense of the disaster. There’s ‘The Sea, One Day’, where we see civilian sailor Mark Rylance set off from the English south coast. And there’s ‘The Air, One Hour’, in which RAF pilot Farrier (Tom Hardy) engages in dogfights with the Luftwaffe. There are other characters – young troops on the beach played Fionn Whitehead and Harry Styles; a disturbed soldier (Cillian Murphy) rescued from the hull of a sinking warship. Yet as much as these familiar faces give us something to grab onto, this is a war film without heroes or a straightforward story. The event is the story. If that means some of the film feels chilly, a little distant, it’s at the expense of easy sympathy and simplistic drama.

Churchill called Dunkirk a ‘miracle’. The newspapers tagged it a ‘triumph’. Nolan resists any punch-the-air celebration. Hans Zimmer’s score scrapes away at you throughout, piling unease on unease before flirting with Elgar’s war remembrance anthem ‘Nimrod’ and backing off, as if embarrassed. Questions are posed about the government: a survivor asks an RAF pilot back home, ‘Where the hell were you?’. The older generation owes a debt to the young: ‘That old bloke wouldn’t even look us in the eye,’ observes one soldier. We hear Churchill’s ‘We shall fight on the beaches’ speech, but the words come from the mouth of a dazed soldier, not the PM. There’s no glory here, just survival. It’s a sombre tribute that makes a distant war feel uncomfortably present.