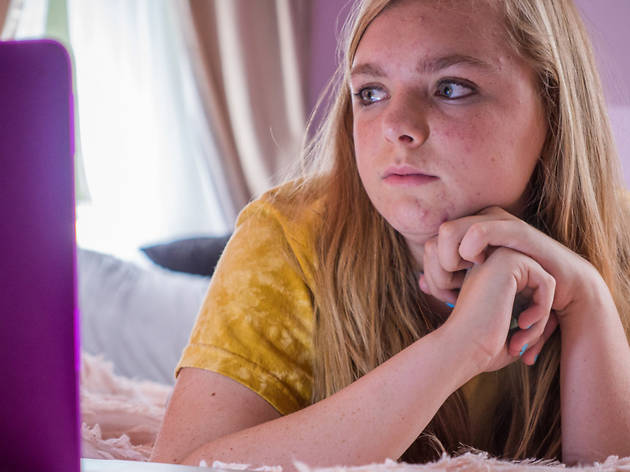 Growing up is hard to do for a social-media-obsessed teen, but Bo Burnham's gentle, keenly observed indie is on her side.

Kayla is exactly the wrong girl to be posting YouTube videos about ‘confidence’ or ‘being yourself’, but you'll absolutely love her for trying. As played in the sweetly sympathetic ‘Eighth Grade’ by then-13-year-old Elsie Fisher (hatching a guileless, emotionally exposed performance that could be underrated due to the film's documentary-like rawness), Kayla is a heartbreaking flow of awkward ums, likes and circular brain farts. She turns the act of speech into an alien process. As the lens widens out, Kayla's shyness comes into sharper view: the post-it notes dotting her mirror reminding her to practice small talk and jokes, and Fisher's own inchoate physicality – a pimply, round face that contains hints of the pre-flame-out Lindsay Lohan.

Writer-director Bo Burnham's debut feature tracks Kayla during her final week of middle school, a transitional moment fraught with anxiety. If his episodic building blocks are a touch familiar, Burnham can’t be beaten for mouth-breathing naturalism, steering ‘Eighth Grade’ into the squirmy company of ‘Kids’, Catherine Breillat's ‘Fat Girl’ and ‘Welcome to the Dollhouse’ (all of them tougher movies, but about real teens, as is this). A birthday pool party becomes Kayla’s slow-motion nightmare, as she’s surrounded by soda-swigging peers who are nonetheless further down the road of maturity. Caught in the act of practicing blow jobs on a banana by her single dad (Josh Hamilton, who nails a tricky climactic monologue), she flings the fruit at his chest, which lands with a satisfyingly meaty thud.

There's a whiff of helicopter-parent nervousness and anti-Instagram hectoring to Eighth Grade – Kayla as well as her bitchy nemesis, Kennedy, both spend a pointed amount of time staring into tiny screens – plus the arrival of a gloriously supportive older high-school mentor, Olivia (Emily Robinson), and some adorkable boyfriend material in condiment-loving Gabe (Jake Ryan) feels safe. But Burnham's directorial confidence grows in tandem with that of his main character. At first, he leans on Anna Meredith's squelchy synth score for laughs, yet by film's end, we're learning, obliquely, about the mother who left, in a backyard scene of moving father-daughter intimacy. ‘Eighth Grade’ is lovely work, lifted up by a timeless piece of indie wisdom: Keep it real, as cringe-inducing as that can be.