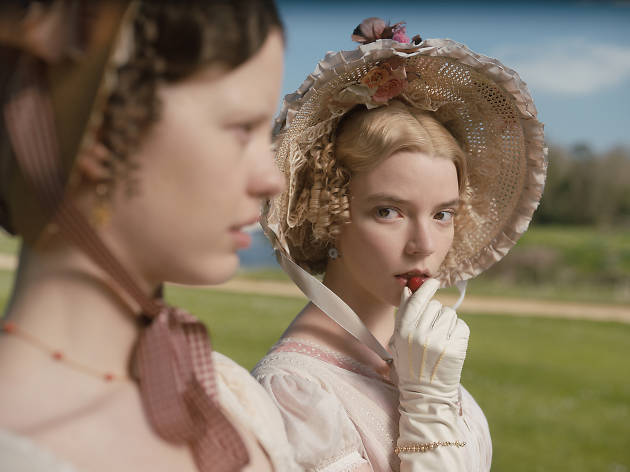 There’s a ‘brief natural nudity’ warning on this new adaptation of Jane Austen’s ‘Emma’, but do not fear: this beloved tale of misguided matchmaking hasn’t been spiced up with unseemly games of naked croquet or teatime orgies. Instead, preparing to be dressed by his manservants after a muddy walk, Emma’s old friend and potential love interest Mr Knightley (Johnny Flynn) disrobes matter-of-factly. The camera doesn’t dwell on his bare bum, but it certainly doesn’t look away bashfully either. It signals that this take on the book comes with just the slightest edge. Yes, it’s still a studiously family-friendly period comedy, but with the occasional buttock thrown in.

This statement scene is, perhaps, a clue that ‘Emma.’ is the work of a female director. Autumn de Wilde purposely displays male nudity before female, and she takes a refreshing interest in the reality behind the pomp and circumstance that dominated upper-class life in the 1800s. While the romance in ‘Emma.’ is not the main point, it’s only when stifling ceremony is abandoned that true love can really blossom. There’s a terrific scene when Emma (Anya Taylor-Joy) and Knightley convulse into rare giggles, and another when they let their guard down behind a strategically placed screen.

Known for her witty fashion films and music videos for the likes of Rilo Kiley and Beck, de Wilde puts a subtly contemporary stamp on ‘Emma’. Alexandra Byrne’s costumes revamp the Regency look with shoulders as sharp as Emma’s withering looks, modernising Austen’s most dangerously fashionable heroine. There’s a message here for the Insta generation: a modern-day Emma would probably be considered an influencer as she smirks her way round the village of Highbury (not that one), dispensing wisdoms about the importance of status, and making rash judgments. Taylor-Joy is perfect in the lead role, supported by, among others, Mia Goth as her naive young friend Harriet, Flynn as an unusually earthy Knightley and Bill Nighy as Emma’s father, Mr Woodhouse, prone to fretting about draughts in an amusing fashion.

Where this adaptation falls down is both in the pacing and structure – it feels more like a long series of sketches rather than  tight narrative – while Isobel Waller-Bridge’s jaunty score tiptoes towards grating during a few of the weightier, emotional bits. As with most Austen adaptations – from the faithful ‘Emma’ with Gwyneth Paltrow to the looser, ‘Clueless’ with Alicia Silverstone – the best part is the witty jousting of Austen’s text and a story that explores the learning curve between arrogant youthfulness and adulthood. Did we really need another adaptation? Probably not. But if this energetic, fitfully funny version introduces the story to a new generation, heck, bring on a new ‘Sense and Sensibility’ too.