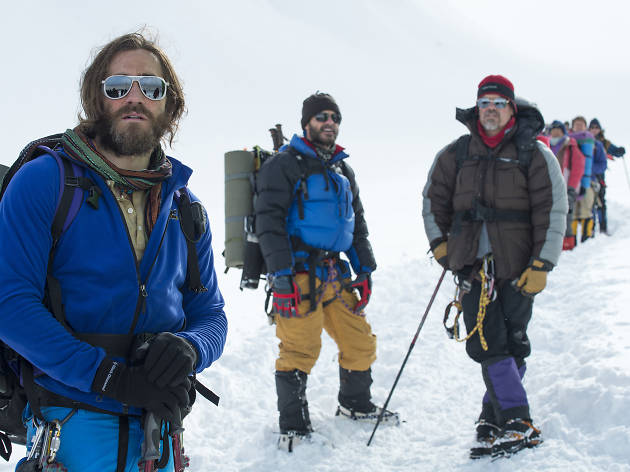 ‘Everest’ is an unrelenting real-life disaster movie that strands you near the top of the world’s tallest mountain and dares you to imagine what it must be like to be part of an expedition to the top going horribly, horribly wrong. Its screenwriters, William Nicholson and Simon Beaufoy, respectively have ‘Gladiator’ and ‘127 Hours’ to their names, and ‘Everest’ combines the muscular, sometimes sentimental force of the former with the sense of being party to an extreme physical endurance that made the latter so successful.

Like ‘Gravity’, another spectacle involving a conflict between humans and a hostile environment never meant for us, ‘Everest’ relies heavily on awe, special effects and 3D. As director Baltasar Kormákur’s camera appears to glide just above the highest ridge of Everest, this mass of rock, snow and ice is just as terrifying and mysterious as the vast blackness of outer space itself.

Based on an actual trip to the summit in 1996 that ended in tragedy, an air of doom hangs over ‘Everest’, forcing you to wonder which of its endearing ensemble cast will make it down alive. The inevitability of death makes it all the more tough to watch. Who, as mountaineering jargon has it, will finish up ‘gone’? Maybe John Hawkes’s gentle, unassuming postman, whose trip is part-funded by school kids? Or Josh Brolin’s millionaire family man from Texas? Or Jason Clarke’s affable team leader? Or Jake Gyllenhaal’s extreme-sports dude? He’s emblematic of the mid-1990s globetrotting outsider culture, which still saw Starbucks as cool and partly led to an explosion of commercial outfits operating on a crowded Everest.

When we’re not squirming at the sight of deathly drops or feeling whipped by the weather, we’re plunged into the emotional distress of those left behind – wives played by Robin Wright and Keira Knightley, and base camp coordinator Emily Watson, who’s manning a satellite phone halfway down the mountain. The film crosses into soppy territory when it forcefully begs our tears, but Kormákur creates such a convincing world – the craft of this film is astonishing – that you’re willing to forgive its less delicate touches in favour of its totally compelling depiction of what it must be like to ascend into a place that’s heaven one moment and hell the very next.