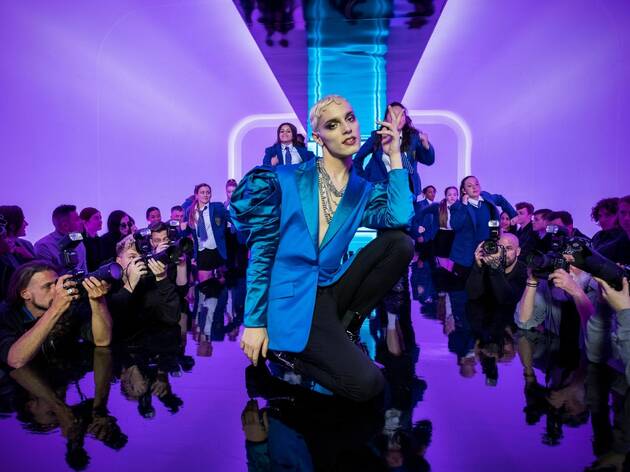 There’s a lot going on in the world right now, which makes it the ideal time for a big gay energy musical to sashay gloriously and unapologetically on to our screens. Sadly, Ryan Murphy’s The Prom was not that film. But where that Netflix hopeful fizzled and flopped, Amazon Prime’s Everybody’s Talking About Jamie absolutely shines.

Based on the true story of a 16-year-old Sheffield lad who dreams of being a drag queen and wants to wear a dress to this school prom, it has enjoyed a remarkable journey since starting out as a documentary (Jamie: Drag Queen at 16).

It was adapted into a hit musical, with music by Dan Gillespie Sells and a book and lyrics by Tom MacRae, that was then filmed live for the big screen by director Jonathan Butterell. He returns to transform it from a filmed staging into an actual movie musical, shot on location in the lush green-hilled South Yorkshire city.

Newcomer Max Harwood is fabulous in his bleach-blond do as Jamie New, all cut-glass cheeks and impudent lip in his school blazer, the boy who simply does not care what you think. This is not a coming out story. He’s already loud and proud, replete with snappy comebacks that prime him for his inevitable evolution to the bright lights of the local drag-club stage. He’s guided along the way by Richard E Grant’s drag-shop owner Hugo Battersby, aka semi-retired queen Loco Chanelle.

Jamie’s dad may not be on the scene, but Happy Valley star Sarah Lancashire is all heart as his super-supportive mum, with Coronation Street’s Shobna Gulati always on hand for a pick-me-up as her gobby best friend. Jamie also enjoys the dedicated support of his brainy best mate Pritti Pasha (Lauren Patel), a Muslim girl who’s more interested in passing her maths exam than mucking about at the prom.

While there is a light dusting of homophobic bullying, it continues to be reassuring to see LGBTQ+ stories move beyond trauma narratives. Mostly, it’s just a life-affirmingly simple story of a young lad following his dream, supported by the majority of those around him. Catastrophe star Sharon Horgan is great as a teacher who doesn’t quite know what to make of him, but is nonetheless kind.

A multicoloured pride parade, the singing and dance sequences are lush, and you just know Jamie shall go to the ball. There’s a reason why we keep coming back to the same fairy tales. Positively glowing, it just might be one of the sweetest gay films to come out of England since Beautiful Thing.