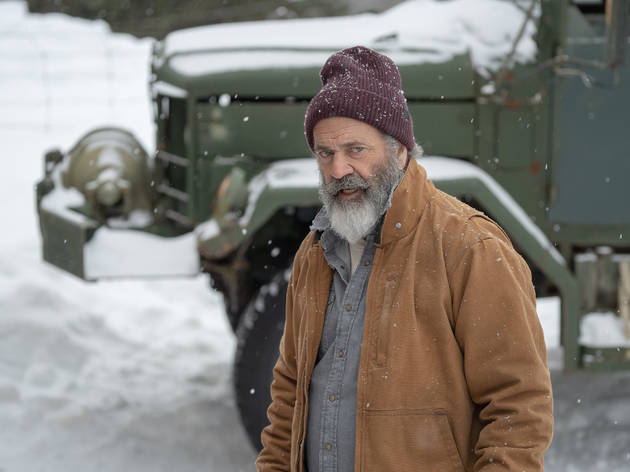 Mel Gibson’s turn as a gritty, gun-wielding Santa is the cinematic equivalent of a stocking filled with coal

The edgy Santa Claus movie is a genre unto itself at this point in cinematic history, recasting the jolly old elf as a naughty-lister who wears a red suit because it might help conceal a few blood stains. We’ve seen Father Christmas rack up a body count in slasher flick Silent Night, Deadly Night and wantonly indulge in sex and booze in Bad Santa. In Fatman, Santa is put in the crosshairs of a seasoned assassin, but this intriguing B-movie premise tees up a dark comedy almost devoid of laughs.

Casting the somehow still-employable Mel Gibson as a Santa who’s given up the bushy white beard and fur-lined uniform in favor of flannel and a beanie, Fatman wastes no time in sticking a gun in his hand. The straightforward approach extends to the premise: an insufferable rich kid receives a lump of coal for Christmas and hires a contract killer (Walton Goggins) to snuff out the guy who brought it down the chimney.

What could have been a self-aware, action-packed John Wick-meets-Saint Nick tale soon gets bogged down in tedious exposition. Gibson’s Santa is grumbly, it turns out, because the increasing number of naughty kids in the world means that the North Pole workshop’s subsidy from the US government has been reduced. Santa has had to take a military contract to make ends meet, putting his elves to work building weapons – and (unfestively) as cannon fodder when the Goggins’ hitman arrives.

By the time that moment arrives in the film’s final 20 minutes, you’ve sat through enough half-arsed jokes and monologues about the challenges of being a benevolent toy-deliverer to feel thoroughly ready for some bloodletting. Sadly, it’s just as listlessly executed as the rest of Fatman. You’d think a movie about killing Santa could find some compelling stakes but like his signature red cap, they’re MIA here.

Not even a few delightfully maniacal line deliveries from Goggins and the endearing warmth of Marianne Jean-Baptiste as Santa’s wife can save this elf-sploitation fiasco from feeling like a slog. It doesn’t help that the only message this Christmas-adjacent film can muster is that you probably shouldn’t mess with a Santa packing heat. If you desperately need a subversive-yet-seasonal flick to watch after you’ve finished decking the halls, skip this ho ho ho-hum effort in favour of something that might actually put a twinkle in your eye.