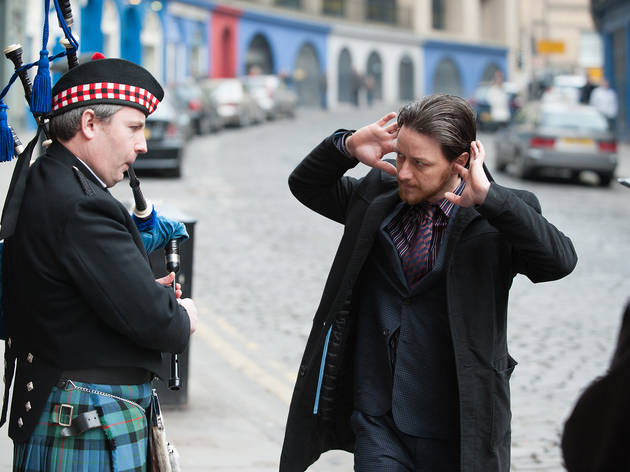 There’s in-yer-face cinema, and then there’s in-yer-face, down-yer-throat and throw-it-back-up-all-over-the-pavement cinema. This punky adaptation of Irvine Welsh’s novel ‘Filth’ is a glossary of grimness, a dictionary of darkness. But it also dishes up humour that’s blacker than a winter’s night in the Highlands and unpolished anarchy that’s true to Welsh’s out-there, frighteningly frank prose.

Best of all, it features a possessed, full-on turn from James McAvoy that threatens to turn upside down the worldview of anyone who knows him only as Mr Tumnus the faun in ‘The Chronicles of Narnia’. For one thing, Tumnus never went wild on drugs in Hamburg with a straightlaced pal from a Masonic lodge.

‘Filth’ is a scabrous journey into the mind of a sociopath. It tells of Bruce (McAvoy), an Edinburgh police detective who’ll stop at nothing to climb the greasy career pole. It’s a pole lubricated with lashings of casual racism, sexism and homophobia, and the staff canteen would do better business selling booze, fags and cocaine. On the outside, Bruce is funny, raucous, one of the lads, helpful to a tee. On the inside, he’s dying, a shell of a man – abandoned by his wife and young child. Loud and frenetic, the film swerves in and out of the real and imaginary world – and the valleys of Bruce’s imagination are an uneasy place to forage for fun.

Writer-director Jon S Baird (‘Cass’) borrows from the ‘Trainspotting’ rulebook: this world is larger than life; characters flirt with caricatures; and everyone is a touch more good-looking and likeable than you’d expect. McAvoy doesn’t look quite old enough or damaged enough to play Bruce. Yet the ‘X-Men’ star more than makes up for it with his sheer, caution-to-the-wind energy. The film’s later shifts of tone from quick comedy to darker depths are smart and well-earned.

All around McAvoy are top-drawer British actors who complement the film’s scatty air: Jim Broadbent is a deranged psychiatrist; Shirley Henderson is a sex-starved housewife; and, best of all, Eddie Marsan is a mousy businessman who lets it all hang loose on a wild weekend away.

You’ll be scraping this film out from under your fingernails for weeks.