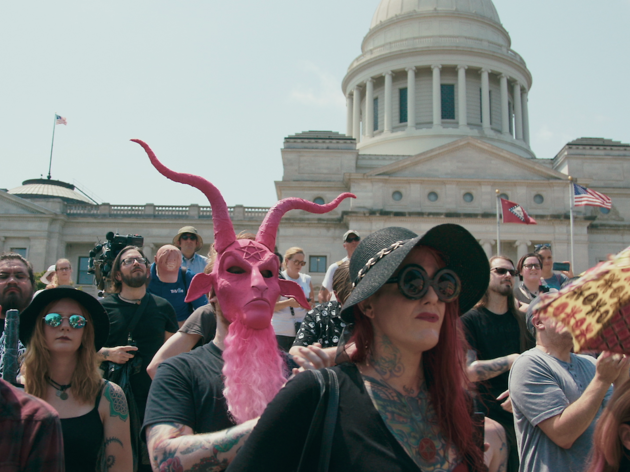 Chronicling the activist battles of today's Satanists, the documentary is possessed not by evil but by a clear eye, a cool head and a sense of humor.

By one way of looking at it, the title of Penny Lane’s documentary poses a casual invitation: Sandwich for lunch? Stroll in the park? Worship Lucifer? Why the hell not? Call it devilishly funny, then, that you may resonate with the organization at the heart of ‘Hail Satan?’, a civic-minded and oddly sensible bunch that, along with its preference for wearing black, firmly believes in the rights and welfare of all.

The Satanic Temple, a modern group founded in 2013 that’s more of a culture-jamming front, definitely deserves a movie. But it’s lucky to have gotten one from Lane (‘Our Nixon’), whose loose camera style approaches the deadpan visual humour of ‘This Is Spinal Tap’. Led by their Harvard-educated spokesman, Lucien Greaves, the Satanists appear at state-assembly meetings, calmly insisting on equal representation alongside the Bible-thumpers who usually dominate such proceedings. They have a point. Religious plurality is a cornerstone of constitutional freedom, and sometimes it takes a protester wearing Day-Glo–pink horns to remind us of that.

Some of these showdowns are as thrilling as ‘Hereditary’, including a Michael Moore-like confrontation with an enraged parent who won’t abide an After School Satan Club for kids (here, the movie almost tips into violence). There’s real depth, too, especially when Lane explodes the widely shared notion that the U.S. was founded as a ‘Christian nation’. (Like the off-frame filmmaker herself, you’ll sputter to learn that the Ten Commandments monuments now popping up at government buildings were actually movie props produced by Paramount Pictures in the 1950s to promote its Charlton Heston epic, ‘The Ten Commandments’.) A touch too brief, ‘Hail Satan?’ could have drawn a stronger contrast between the ostensibly evil Satanists and their self-righteous opposition, frequently exposed as shams. But as dark spells go, Lane’s is complex, one that will lead viewers down a surprisingly benevolent path.