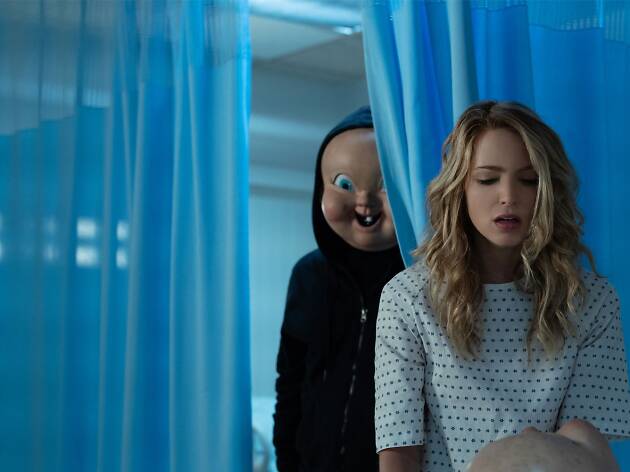 It's diminishing returns for a horror sequel that grinds the original premise into the ground while shirking on scares.

The first ‘Happy Death Day’, a ‘Groundhog Day’-infused slasher flick about a blasé sorority mean girl who must relive her murder over and over again until she solves it, felt like a pendulum swing back to the snarky era of ‘Scream’. (Elsewhere, horror is going through an intense moment, typified by ‘Hereditary’ and ‘A Quiet Place’.) As playful as things got, there was always a butcher knife around the corner, keeping genre connoisseurs satisfied. Taking over screenwriting duties from the original’s Scott Lobdell and straining the silliness past breaking, director Christopher Landon mounts a sequel that forgets to be scary. You can’t put the genie back in the bottle – maybe this was a brilliant concept that was only meant to function once – but did ‘Happy Death Day 2U’ need to be so obnoxiously self-aware?

The problem isn’t our furious heroine, Tree (star Jessica Rothe, appealing as ever as a cosmically challenged problem solver in a baseball jersey and bedhead), or her cohort of new friends, a quantum-physics nerd squad led by Ryan (Phi Vu), the bleach-blond Asian guy who, when he’s not barging into dorm rooms, is building a device that creates fissures in time. All of that stuff still works; it even feels welcome, like coming home to a beloved cast of characters.

But after an eerie scene in which Tree and Ryan are surrounded by dozens of potential killers (turns out the baby mask is the costume of their college’s popular mascot), ‘Happy Death Day 2U’ swerves away from thrills and, jarringly, into ‘Weird Science’ territory. It becomes a sneaking-around-campus movie, one with a syrupy side of parental sentimentality, and that doesn’t bode well for dark magic. ‘This kind of reminds me of ‘‘Back to the Future 2”,’ someone notes, all but elbowing us in the ribs. Ah, yes, we remember that one: another cash grab that made us want to return to its inspired forerunner. Sometimes reliving the same night over and over ain’t so bad.