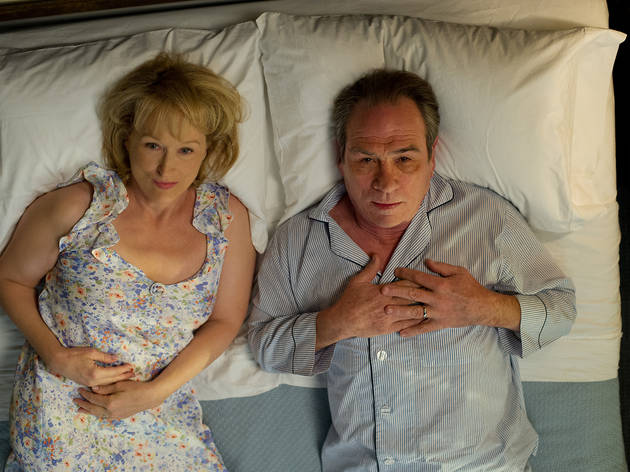 It’s now much, much more daring to make a movie about a late-middle-aged couple trying to salvage a faltering marriage than to do one about superheroes saving a metropolis, so you can only imagine the pitch that filmmaker David Frankel (The Devil Wears Prada) gave to studio suits about this domestic dramedy: “He’s a tax accountant, she works in a boutique clothing store, and they’ve been together for 31 years. They don’t really connect with each other anymore, nothing going on in the bedroom. So the wife signs them up for this weeklong session with a well-known couples counselor in Maine. Her cranky-pants husband hates the idea, but he goes along with it anyway, griping the whole time. Once they’re there, this therapist forces the sexagenarians to discuss their broken relationship and gives them ‘sexercises’ to do. Basically, it’s old people talking and possibly fucking. [Sound of crickets] I mean, of course there will be stars in it!”

Thankfully, Frankel & Co didn’t cast just any famous faces: He got Tommy Lee Jones and Meryl Streep to play the spouses, and you can’t underestimate what these two veterans bring to the table. Or rather, the couch, as they turn the film’s handful of therapy scenes into an acting clinic: This is how you listen to a scene partner, register nuanced reactions of desire and disappointment, communicate emotional complexity and a storied history via a glance or a twitch. (As the counselor, Steve Carell clamps down on his usual mania and honors the character’s blandness; consequently, they might as well have hired a swatch of beige wallpaper.)

When the sing-song Jones and beatifically smiling Streep are allowed to carry the dramatic weight, you can see the raw, tough-love film that Hope Springs wants to be – until Frankel starts trying to be lighthearted and cute, at which point you see the movie’s real troubled marriage in full bloom. Mounting a Cassavetes-lite look at two people untangling decades of dysfunction is hard enough; attempting to blend it with an ill-conceived Nancy Meyers-ish farce is a tightrope walk that the movie simply can’t negotiate. Sugar may help the medicine go down, but serving up the glucose in such goopy portions (especially when the elixir is the intriguing part) doesn’t help anyone. You’re better off savoring the duo’s damaged duet scenes and letting the rest wash down the drain.