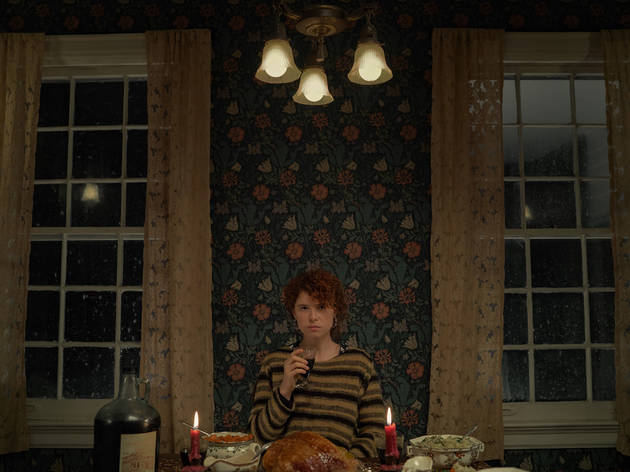 As if the world wasn’t troubling enough, here’s a savage, surreal new Charlie Kaufman film, coming to Netflix, beamed straight into your homes, just in time for you to sink behind the sofa on darker nights and wish the awkwardness and misery would go away. This is a recommendation, by the way: in his films as writer-director, Anomalisa and Synecdoche, New York, and in his scripts for Adaptation and Eternal Sunshine of the Spotless Mind, Kaufman’s very special genius has always been to apply the blackest of humour and the trickiest of storytelling. He brilliantly observes horribly true details of what it means to be human – to live, to love, to succeed, to fail, to breathe.

With I’m Thinking of Ending Things, he’s delivering all these things and pushing again at the boundaries of what a screen story can achieve. He gives us extraordinary performances from Jessie Buckley and Jesse Plemons as a newly hooked-up nervy, awkward couple. Weirdly, perhaps, Kaufman is a romantic – drawn to the possibility of beautiful connections between two people, just as much as he’s drawn to follow up with an endless list of how and why it’s all doomed to fail and we’re all just so goddamn fucked up. Yes, winter is coming.

For his third film as screenwriter-director, Kaufman has adapted a 2016 debut novel by Canadian writer Iain Reid. It tells of a road trip, with Jake driving his new girlfriend Lucy (at least, she seems to be called that) to the middle of snowy nowhere to visit his folks (Toni Collette and David Thewlis, both brilliant) on their farm in the deep countryside. Great swathes of the film are taken up by the drive there and back, with long conversations that, from the beginning, plant doubts in our mind about what we’re seeing and hearing. Tones shift; facts don’t add up. The driving scenes are interrupted by shots of an elderly caretaker at a high school. Who is he? What’s his link to these two?

There’s frequent voiceover from ‘Lucy’, and it feels at first like it’s her mind we’re in. That it’s her thoughts we’re privy to. That this is her story. But that ends up feeling more and more like a bluff and that the film is more a reflection of Jake’s state of mind than anything else: his past, his present, his future, his hang-ups, his fears, his desires. Does the woman even exist? Do his parents? Is this version of Jake we see even himself or just a figment of someone’s warped memory? Maybe his own?

Take a deep breath. Kaufman plays around with time and truth. Sometimes he does this so subtly you barely notice or you doubt yourself (does Jake’s hand suddenly look old in one particular close-up of him changing gears in the car?). At other times he gives us moments of in-your-face horror, such as when Jake’s parents suddenly, horribly age during the couple’s visit for dinner.

The genius of Kaufman’s films – alongside their wild, dark imagination and the intense, A-game performances they inspire – is that they demand a meeting of minds. His and yours. They’re bleak, they can be frustrating and they offer a lot of unanswered questions. And all of those things are true here. But they also give as much as they demand. Have ‘fun’ working this one out as the nights draw in around us.

Streaming on Netflix from Fri Sep 4