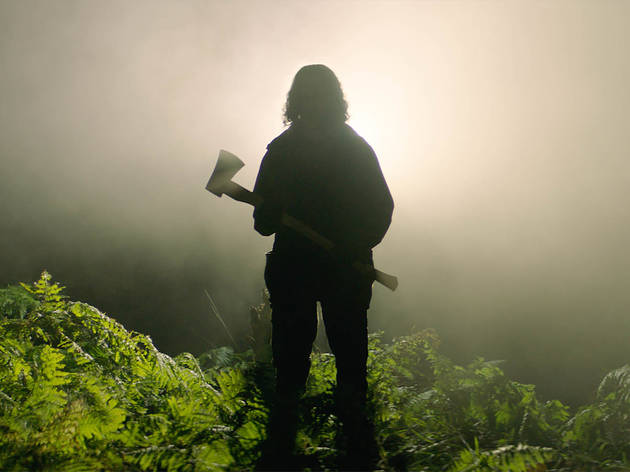 The latest from leftfield British indie powerhouse Ben Wheatley is a quarantine quickie – a low-budget trippy horror, set during a pandemic. The High-Rise and, most recently, Rebecca director wrote In the Earth in spring 2020 in the early days of the lockdown and shot it almost entirely outdoors in just two weeks that same summer.  The result is a soil-under-the-fingernails, forest-bound mindmelter – with bonus pagan chills.

The set-up sees a nervy scientist, Martin (Joel Fry), arrive at a remote research station before setting off into the woods on a simple two-day mission with his park-ranger sidekick, Alma (Ellora Torchia). The premise is simple (don’t go into the woods, especially when there’s talk of a creepy local folk legend!); the reveal is a tonic for anyone who thinks they’ve been getting too little excitement while cooped up inside these last few months.

The threats of violence that emerge on this pair’s damp adventure, coupled with a general lo-fi and deadpan vibe, hark back to Wheatley’s earlier Kill List and A Field in England. There are flashes, too, of the black ‘we’ve gone on holiday by mistake’ comedy of Sightseers, especially when a sadistic third character played by Reece Shearsmith appears (the less said about him the better; let’s just say his emergency medical skills are lacking).

It’s not all subtle, but some of the little details go a long way. The pair have their trainers stolen on the first night under the stars and have to continue barefoot. From there, Wheatley’s toy box turns out to be quite deep considering the sparseness of the story generally: sound, light, spores, axes, arrows and poison all feature. They all become threats in this innocent-looking English wilderness – given atmospheric life by Clint Mansell’s front-and-centre score and Wheatley’s copious use of funky lighting effects when night falls.

It’s not all about the Covid pandemic, of course, but In the Earth definitely feels of this viral moment. Characters talk of having to choose between either art or science to combat an unseen threat. There’s also a cameo for a real-life horror: the deep-up-the-nose virus test. It’s nothing too sophisticated or layered: a jab of timely anxiety, destined to be a freakout midnight movie when cinemas finally reopen.