It Comes At Night 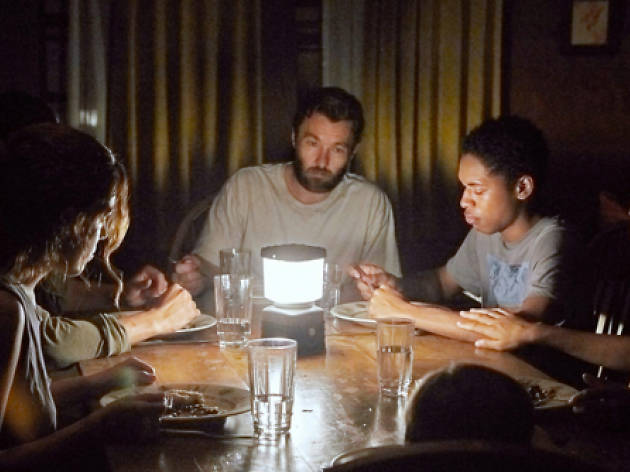 This nerve-shredding thriller from 28-year-old director Trey Edward Shults joins the esteemed company of Cormac McCarthy’s ‘The Road’ and the handful of intimate post-apocalyptic stories that puncture through to our deepest fears with tales of civilisation in free fall.

Confidently, the movie throws us in at the deep end with no time to process what’s happening. In the deep dark woods, an old man covered in black boils is wheelbarrowed to an unmarked grave, shot and incinerated in a pit. He leaves behind an adult daughter, Sarah (Carmen Ejogo), her husband, Paul (Joel Edgerton), and their 17-year-old son, Travis (Kelvin Harrison Jr). In the flickering lantern light of the movie’s electricity-free universe this family have got survival down to a science. Their fortified home, covered in wooden planks and lined with plastic sheeting, has one double-locked entrance, painted red as a warning to anyone who might dare to approach.

Yet someone does approach, banging on the door (the sounds in this film should come with a heart attack warning). He is Will (Christopher Abbott) and he’s not ‘sick’. Don’t hold your breath waiting to find out what the plague is in this film. Part of what makes Shults’s film transcend an episode of ‘The Walking Dead’ is that it traffics in the unknown. Will is soon joined by his wife, Kim (Riley Keough), and their three-year-old son.

Even as we get more details about life during this endgame, Shults develops the psychology of his characters. Travis, a hormonal teenager, is coming of age in a world where sex is the last thing on people’s minds, yet chatting with Kim unnerves him. What a complex film – it will have you thinking about our current uneasy moment, when everything feels like it could come crashing down after a careless tweet. ‘Wanna know all about the Roman Empire?’ jokes Paul, a history teacher. He’s a little too late.

Director:
Trey Edward Shults
Cast:
Joel Edgerton
Christopher Abbott
Carmen Ejogo
You may also like
Popular movies
We know this city. Do you?