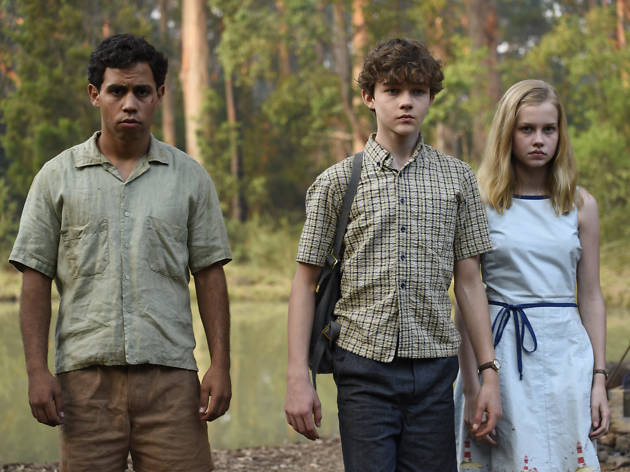 It’s a primal scene in recent Australian literature, theatre and now film: the young, half-Aboriginal Jasper Jones (Aaron McGrath) taps on the louvred window of sensitive white kid Charlie Bucktin (Levi Miller) in the dead of night. It’s late December, 1969, in small town WA, and Charlie’s bookish existence is rattled when Jasper shows him the corpse of local white girl hanging from a rope in the bush next to a billabong. Jasper is convinced he’ll be blamed for the girl’s death: will Charlie help him?

What follows is a coming-of-age story combining the simmering racial tensions of the era, family secrets, sexual awakening and the revelation that parents are people too. Charlie tentatively bonds with the dead girl’s sister, Eliza (Angourie Rice); watches while his friend Jeffrey (Kevin Long), a Vietnamese Australian, suffers bigotry from local louts and the parents of a soldier recently killed in Vietnam; and sees the cracks widening in the marriage of his bored mother and mild-mannered father (Toni Collette and Dan Wyllie). Then there’s the mystery of the town misfit, ‘Mad’ Jack Lionel (Hugo Weaving), rumoured to have killed a woman long ago.

The resemblance of Craig Silvey's novel, and Kate Mulvany’s acclaimed stage adaptation, to To Kill a Mockingbird (with echoes of Huckleberry Finn) has not troubled its fans, but watching Rachel Perkins’ film – adapted by Silvey and Snowtown’s Shaun Grant – it’s hard to keep at bay memories of Robert Mulligan’s landmark 1962 Mockingbird movie. Jasper Jones rehashes key plot twists and offers watered-down versions of Atticus Finch, Boo Radley, Tom Robinson and more. Worse, its diversions away from the murder plotline get increasingly frustrating, and the ending is maddeningly inconclusive.

On the plus side, the acting is superb. Collette revels in the role of a mum in the throes of mid-life crisis, and Weaving hits emotional highs in his one lengthy, impassioned scene opposite McGrath (who seems destined for big things). Miller, whose similarity to a young Russell Crowe is uncanny, demonstrates why he’s already an international star at just 14, anchoring the film as the wide-eyed Charlie. Devotees of the novel will find this a faithful rendering.

Director:
Rachel Perkins
You may also like
Popular movies
We know this city. Do you?