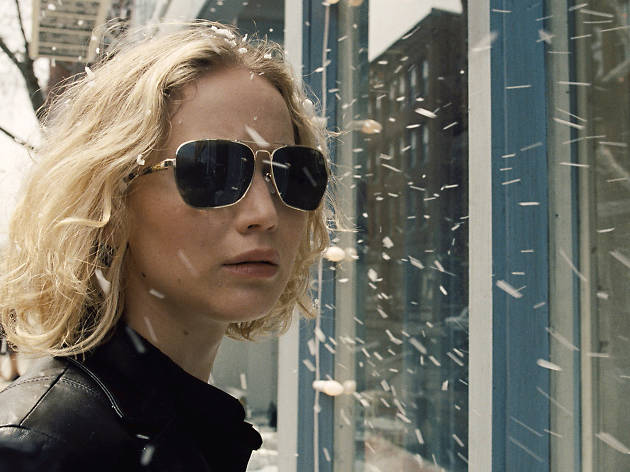 David O Russell’s wacky screwball spin on the rags-to-riches biopic opens with the line: ‘Inspired by stories of brave women.’ He could just as easily have borrowed the opening line from his last film, ‘American Hustle’ – ‘Some of this actually happened.’ ‘Joy’ is loosely based on the life of Joy Mangano (Jennifer Lawrence), the Long Island single mom who in the early 1990s invented the self-wringing Miracle Mop and became a shopping channel superstar.

Cinema is full of American dreams: stories of men battling to build empires. This is a film about three generations of women. It has some of the macho stuff: the nostalgic voiceover, Scorsese-style, by Joy’s grandma (Diane Ladd); Cream’s ‘I Feel Free’ blasting out; and it ends with Joy sitting behind a giant I’ve-made-it desk like Don Corleone. But Russell also mixes in elements of kitsch soap opera, allowing the dialogue to tip over in bigger-than-life melodrama. Only he could pull off a film with one foot in daytime TV and the other in ‘Goodfellas’.

‘Joy’ is brilliantly feminist – written by Russell and based on a story by Annie Mumolo, who co-wrote ‘Bridesmaids’ with Kristen Wiig. We first see Joy as a little girl, making a fairytale forest kingdom out of paper. All that’s missing is a prince, says her sister – ‘I don’t need a prince.’ Later, Joy meets Bradley Cooper’s TV exec, the boss of the QVC channel that will make her a star. Both their hearts skip a beat – but this woman does not have time for that.

Joy is too busy building her business, raising her kids and managing her outrageously misbehaving relatives. And no one does black comic family dysfunction like Russell. Joy is surrounded by a ludicrously neurotic clan. Best of all are Robert De Niro and Isabella Rossellini, who make a deliriously funny double act as Joy’s womanising dad and his rich Italian girlfriend. But it’s Jennifer Lawrence who is irresistible. This is her third film with Russell (after ‘Silver Linings Playbook’ and ‘American Hustle’). You can imagine other Hollywood stars in the role, with their slumming-it faces. But Lawrence is gritty, real and totally genuine. And, after ‘Brooklyn’ and ‘Carol’, here’s another film that passes the Bechdel Test for proper female characters with flying colours.