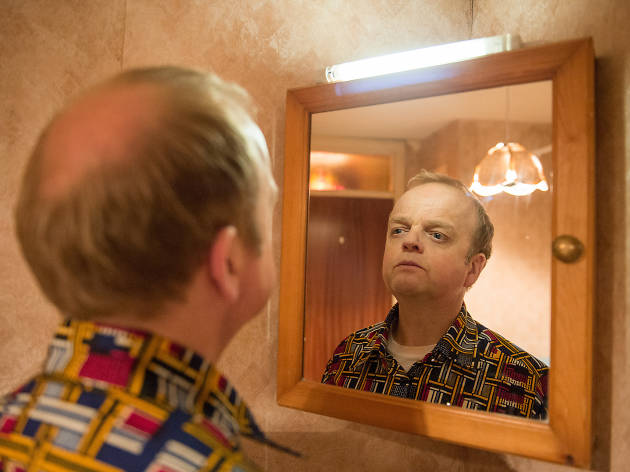 Toby Jones is in mesmerising form in an off-kilter London thriller directed by his brother.

Toby Jones has already played Alfred Hitchcock in the TV film ‘The Girl’; now he’s starring in a ‘Psycho’-flavoured thriller written and directed by his brother, Rupert. A gripping, claustrophobic and ultimately nightmarish affair, it casts the actor as Carl, a loner who’s newly released from prison and living in a shabby flat on a London estate. But Carl is ironing a shirt: he’s preparing for his first date in 15 years. Enter Abby (Sinead Matthews), a brassy blonde he’s met online, who’s all giggles and boozy flirtation, but eyes him carefully when his back is turned. She’s no typical Hitchcockian blonde, but she’s a fascinating character with a major part to play in the orchestrated confusion that follows  – as is Anne Reid as Jones’ visiting mother...

Much like ‘Berberian Sound Studio’, also starring Jones, this intense thriller explores the power of the mind in a small space – although for this ex-convict, the outside world may pose as much threat as his inner turmoil (even putting the bins out feels unnerving and a washing machine becomes a potential menace). It’s very well-filmed: shadows, smoke, closed doors and eerie angles all add to the controlled, tense atmosphere.

But the biggest asset of ‘Kaleidoscope’ is its central star: a dozen revealing and contrasting emotions flicker across his face in a way that feels both honest and mesmerising. Haggard, painful, longing, poignant, confused, alarmed, amused, dejected, sinister... Jones can be all these things without saying a word. You’re with him all the way, trying to decode the mysteries of his life and psyche. Some audiences may find the narrative’s ambiguities frustrating, but if you’re up for a thriller to get you thinking and talking, this is an intriguing watch.