King Arthur: Legend Of The Sword 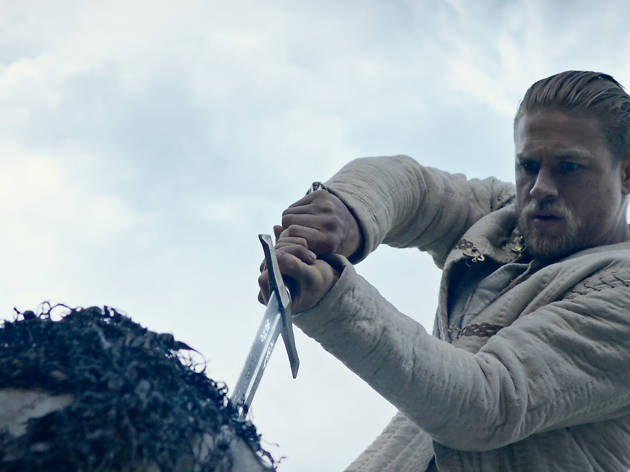 Guy Ritchie’s way-over-the-top, frenzied spin on the legend of King Arthur, with a leaden Charlie Hunnam as the streetwise monarch-to-be and a much more fun Jude Law as his preening evil uncle King Vortigern, offers wall-to-wall testosterone, digital effects, fights and supernatural freak-outs. It walks like a hyped-up ‘Game of Thrones’ on a mega-budget with vast rural vistas, crowds of thousands, endless battles and plenty of bone-crunching. But it talks like ‘Snatch’, with a core cast of British blokes (even a cameo by David Beckham!), the street-level banter weirdly out of place next to the movie’s more grandiose side. It’s patchy and chaotic – but it’s also energetic enough to enjoy as spectacle if you’re willing to forgive its gaps in sense and reason. It’s certainly never dull.

Buried in the fog of Ritchie’s movie are the usual beats of the Arthurian story – the sword in the stone, knights, the lady in the lake and, finally, the round table. This Arthur grows up wheeling and dealing in grimy ‘Londinium’ unaware that he’s the son of murdered king Uther Pendragon (Eric Bana). Ritchie also throws in cheeky London geezers, giant elephants, enormous snakes, lots of freaky eyeball shots and a vision of Camelot that’s dark and Gothic (minus Merlin; the film’s wizarding presence is Astrid Bergès-Frisbey as the weirdly unexplained young mystic The Mage).

You’ll groan at how the director of ‘Lock, Stock and Two Smoking Barrels’ and ‘Sherlock Holmes’ shoehorns his usual tricks into ‘King Arthur’ (sped-up shots, martial arts, swaggering costumes). The film never settles down: for much of it, the end of a quick line of dialogue is the excuse for yet another edit, or flashback, or jump forward, or all of those at once. Sometimes this feels dynamic; other times it feels like cover-up work.

This ‘King Arthur’ has a catchy momentum and it’s visually sparky. If no one opened their mouth, Ritchie’s loud mash-up of history, myth, fantasy, spooky spirits and grim creatures might offer a more consistent charm. Yet mouths do open and awful dialogue tends to tumble out. Put your fingers in your ears when the talking starts, and you might enjoy the view.