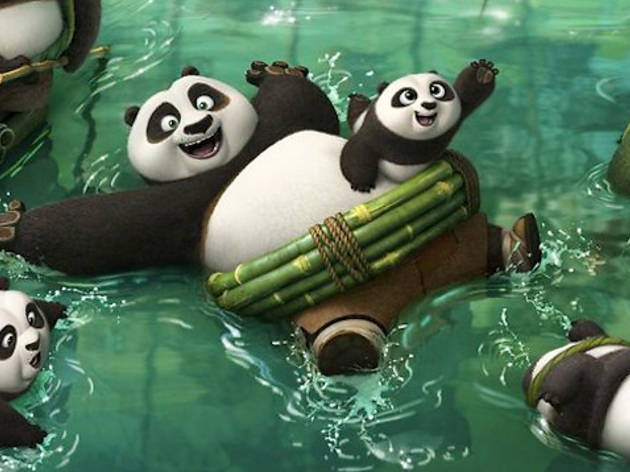 Romance is in the air for Po in this lighter, good-looking third episode in the hugely successful 'Kung Fu Panda' series

Po the panda (voiced by Jack Black) returns as a lovable, paunchy bundle of fur tasked with saving his homeland from disaster in the latest 'Kung Fu Panda' instalment. It’s the first to be co-produced by Oriental Dreamworks—a savvy move, given that China will soon be the world’s top-grossing market. In the final scene of 'Kung Fu Panda 2', we saw that Po’s biological father, Lee, supposedly killed by a genocidal peacock, was alive and well. The new movie follows Lee (Bryan Cranston), who discovers Po at the noodle shop of his goosey adoptive dad, Mr Ping (James Hong). Po is persuaded to visit Lee’s village, but his idyllic time with other giant pandas is shattered by news that the villainous Kai (JK Simmons) has escaped the spirit realm to steal the chi—that's the life force, kids—of China’s inhabitants. Only Po, aided by Master Shifu (Dustin Hoffman) and his friends, can stop him.

It won't be easy, and life lessons are lurking, such as, sometimes, it takes a village. While the scriptwriters happily riff on franchise gags like the excruciating Wuxi finger-hold and excessive dumpling-gorging contests, the new sequel lacks the tear-jerking revelations and darker edge that characterized its predecessor. Visually though, 'Kung Fu Panda 3' is a candy-coloured 3D treat, from the exquisite sunset that shimmers over the panda enclave to the psychedelia of the spirit world. The addition of a love interest for Po, a ribbon-swirling panda called Mei-Mei (Kate Hudson), is a firecracker that fails to ignite; perhaps they’re saving her for the next chapter.