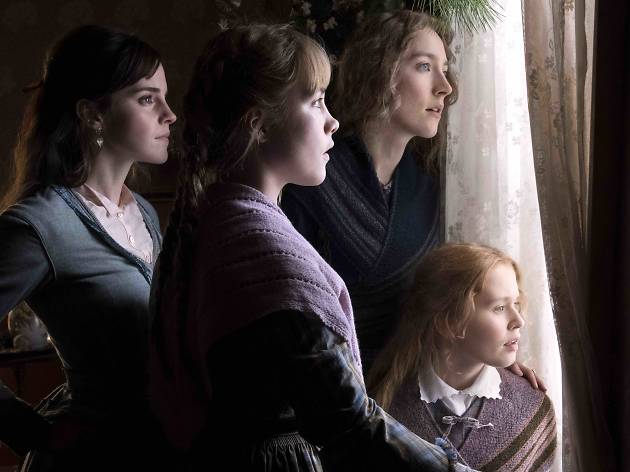 Greta Gerwig has directed only two films that are solely her own but she’s already become a brand. That’s in evidence within the first five minutes of ‘Little Women’, a huggably self-deprecating take on the Louisa May Alcott classic. Brashly confident Jo (Saoirse Ronan, from Gerwig’s debut film ‘Lady Bird’, still uncorking those soulful stares that outclass the competition) sits in the office of a New York publishing house. Because it’s the 1860s, she has to pretend she’s trying to sell the work of a friend. But a parental editor (Tracy Letts, also from ‘Lady Bird’) sees through this and has mercy on her. He reads, pencil in hand. ‘Make sure she’s married at the end – or dead,’ he concludes, somewhat approvingly. Jo, elated, runs down a city block, just like Gerwig did in ‘Frances Ha’.

If this isn’t the ‘Little Women’ you remember, either on page or screen, that’s understandable. But it’s likely the one you felt, and that’s more important. Gerwig, who should be celebrated as both an evolving screenwriter (the bold adaptation is hers) and a shrewd formal stylist, cuts to the thematic essence of the novel – sisterhood and coming of age, but also nostalgia and mourning your own past – and finds a visual language for it. Alcott’s saga of the four March sisters has been divided and restitched by Gerwig into two interwoven halves. Girlish energy suffuses the warmly lit scenes of their Massachusetts teenhood (Daddy’s away, fighting the Civil War), days chockablock with attic theatrical productions, boy crushes and rivalries. Chillier bluish scenes, set seven years later, show compromises made and dreams deferred.

The toggling creates an exquisite tension, not just a freshening-up of the source material, but a modernising impulse that feels wonderfully relevant to today’s overthinkers, cursed with remembering everything from their past and unwilling to let any of it go. Four actors do especially well with Gerwig’s conceit: Ronan has a gift for this kind of modulated neuroticism, while her ‘Lady Bird’ seducer, Timothée Chalamet, brings a rakish complexity to the role of Laurie, the wealthy neighbour’s grandson. In just a handful of scenes, Chris Cooper is quietly devastating as the grieving Mr Laurence, stirred by the strains of piano coming from the next room. But it’s Florence Pugh who wows you the most as the youngest, Amy, who glides from bratty competitiveness to a hard-headed realism. (If Emma Watson and Eliza Scanlen as the other two March girls, Meg and Beth, don’t make the same impression, it’s by intention: Gerwig has designed them more as mirrors.)

‘Little Women’ sometimes plays like a comedy, one that includes a crumpled cry over a bad haircut and several kitchen interludes that feel like Christmas miracles. Yet it’s Alcott’s visionary attitude, well-struck by Gerwig, that stays with you the longest: the loneliness of female liberty in the 1860s. ‘I’m so sick of it,’ Ronan’s Jo says in a weak moment, and your heart melts. It would be a shame to ruin the gift that Gerwig makes of Alcott’s ending; it’s been creatively exploded into a larger catharsis you didn’t even realise you needed. Suffice it to say, we watch a book coming into existence: signatures bound, the cover stretched. It’s literally building ‘Little Women’ from the spine up, and that’s exactly what Gerwig has done over its two hours. She makes it her own – you’ll want to make it yours, too.