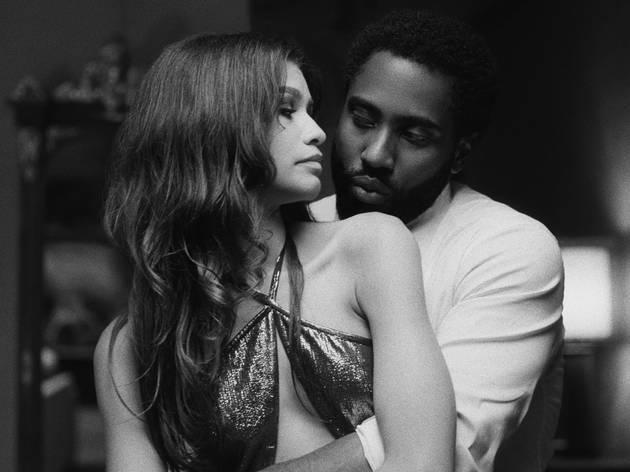 Malcolm (John David Washington), a film director on the rise, and his actress girlfriend, Marie (Zendaya), return to the swish beachside bungalow the studio has put them up in after the premiere of his first movie. It’s late but the buzz was deafening and Malcolm is still high on it. Too high to notice that he’d forgotten to thank her in his speech and it’s eating away at Marie.

Malcolm & Marie kicks off as a compelling enough character drama given moody intensity by the black-and-white photography. The geography of its striking modernist Malibu pad is mapped out by an adrenalised Malcolm, mac ‘n’ cheese is cooked up by Marie, martinis poured, and a debate about his potential place in the film pantheon (he’s pigeon-holed as ‘the next Barry Jenkins’ when he feels William Wyler is a better point of comparison – ego is not an issue here). Then it all goes Who’s Afraid of Virginia Woolf? as Marie airs her grievance and the pair spiral into nearly two hours of on-off verbal sparring.

Filmed over two weeks during lockdown, writer-director Sam Levinson’s two-hander is a drama of diminishing returns: both of a relationship where the things that once worked have become points of fierce friction (she helped him with his script, he helped her get clean); and of a film where the swathes of eloquent but pleased-with-itself dialogue eventually start to drag.

Levinson’s Euphoria star Zendaya is the standout, running the gamut from brittle to bruised to teak-tough in the face of Malcolm’s lethal jabs. Washington (also strong) gets the meatiest monologues, with Malcolm letting loose on how Hollywood’s power structures and racial expectations mean Black filmmakers lose out to any white man with a period drama to make. (Or as the filmmaker puts it in one of his few bona fide zingers: ‘I’m sick and tired of all these little British boys running around here, trying to overcome a fucking birth defect to save the Queen from Hitler’.)

Film critics get it with both barrels too – and fair enough, frankly – with the ‘white girl from the LA Times’ a particular offender for trying to find political meaning where none was intended – a form of racism in itself, argues Malcolm, for whom her rave review is rendered null and void.

There’s a tonne of interesting questions raised in all this that you’re just too numbed to absorb. No matter how often Malcolm goes outside to yell his frustrations into the night sky, the drama doesn’t feel any less airless. Both characters know where the other’s Achilles heels can be found. Watching them jab away is closer to rubber-necking than fun.