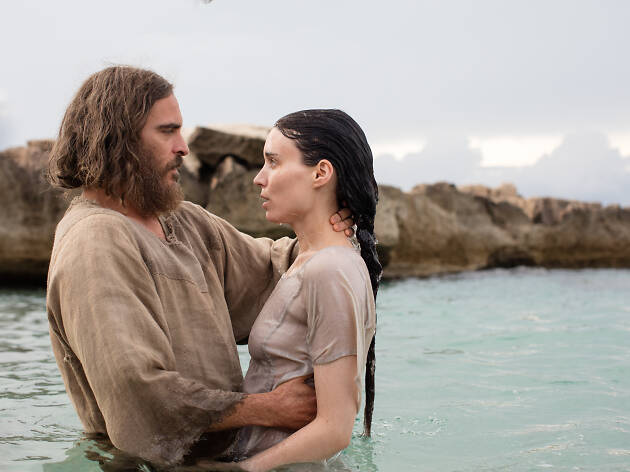 If Jesus and his disciples spent their final years together crisscrossing the Holy Land like members of an unusually clean-living rock band, Mary Magdalene has long been viewed in certain quarters as a kind of spiritual groupie. It’s a reputation this well-intentioned character study sets out to banish as it reimagines her as a feminist, a key player in the gospels’ climactic moments and a chaste confidante to Jesus (a typically off-kilter Joaquin Phoenix). It ripples with interesting ideas: about ethnicity, about Jesus’s ministry as a protest movement, and even about the equation of feminism with demonic possession. But the overall effect is glassy and inert, with Rooney Mara’s Mary an oddly elusive presence in the film that carries her name.

Prime culprits in this are Mara’s scenes with Phoenix: masterclasses in introspection. Their characters share a virtuous intimacy and some Bible-lite dialogue, but not much dramatic meat. ‘Do you have the courage to follow what you hear?’ he asks, gnomically, as she prepares to leave her unfulfilling life beside the Sea of Galilee. Much spikier and more interesting are her interactions with his disciples. They’re an ensemble who reflect the diversity of ancient Judea, with Chiwetel Ejiofor as the hot-headed Peter and Tahar Rahim as Judas Iscariot: a fracturing firebrand who just wants Jesus to kick the Romans out. Among all these vying egos and clamouring voices, the message is clear: Mary is the only one who’s actually listening.

‘Mary Magdalene’ is often lovely to look at, with director Garth Davis (‘Lion’) bathing the film’s dusty landscapes in gauzy light. Jesus’s final days in Jerusalem bring drama (the best scene sees Christ’s betrayal by Judas shot as an unfolding crime), but it’s a long slog to the point where Mary Magdalene finally comes into her own in some snatched, tumultuous moments. Until then she’s a sombre figure at the fringes: you’ll know more about her by the end, but you may not know her better.