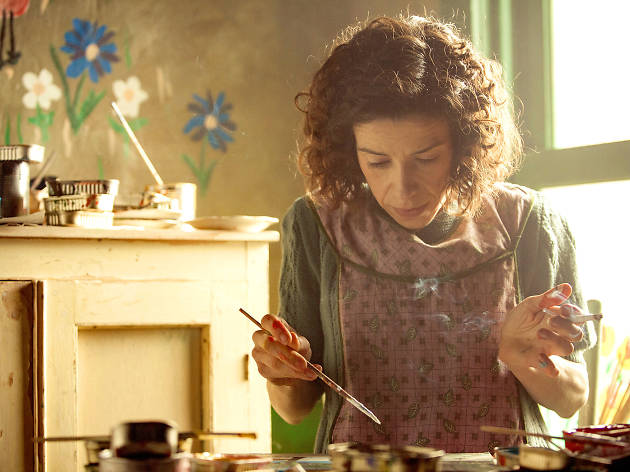 How do you find happiness if the cards are stacked against you? Director Aisling Walsh’s intimate and moving ‘Maudie’, the true-life story of Canadian folk artist Maud Lewis, doesn’t tackle that question head on. Yet the answer sneaks up on you as you watch this film, which is as unassuming and gentle as its subject. ‘Maudie’ breaks your heart with its infectious positivity and an outstanding, big-hearted performance by Sally Hawkins as
the self-taught artist.

We first meet Maud, a smart, vibrant woman living with arthritis and struggling to stay independent, in the late 1930s amid vast Nova Scotia landscapes, picturesquely lit by cinematographer Guy Godfree. To break free from her overbearing family, Maud responds to an ad for a live-in maid, placed by grouchy hermit Everett (Ethan Hawke), who lives in a tiny box of a house and runs a business selling fish.

These odd outcasts aren’t exactly a match made in heaven on paper, yet they form a unique, loving companionship over time. In their rockier early days, Maud wears down Everett’s grumpiness, painting naive happy murals of the countryside on the walls of their shack. Her art – colourful flowers, cats and chickens – grabs the attention of sophisticated New Yorker Sandra (Kari Matchett), who commissions Maud to make work for her. (They develop a friendship that begs for more screen time.) The artist’s fame grows, reaching far beyond the confines of their small world.

Refreshingly, Walsh and Hawkins have no interest in turning ‘Maudie’ into a heavy-handed art biopic à la ‘Pollock’ or a schmaltzy, formulaic one that exploits the disabilities of its heroine, who becomes frailer over time. Like Maud Lewis’s paintings, the film instead celebrates life’s simple pleasures. The film glows with the kind of sweetness last seen in John Crowley’s ‘Brooklyn’. All it asks of you is an open heart.