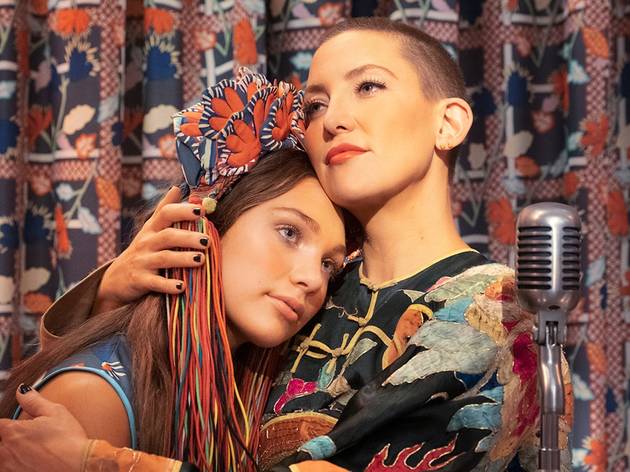 The feature directing debut by mega-selling Australian pop star Sia was always going to be a big deal, as was the return of Almost Famous star Kate Hudson after a three-year absence from the big screen – sporting a fetching buzzcut, no less. Hudson plays recovering alcoholic and unrecovered drug dealer Zu, a hot mess reluctantly pressed into looking after her non-verbal autistic sister, Music, following the death of their grandmother. The casting of neurotypical dancer, actor and Sia stand-in/muse Maddie Ziegler as the title character sparked a heated pre-release debate about who gets to tell whose stories, and who can play who. Sia’s robust response to the criticism and the resulting controversy are sadly the most interesting things about the movie (co-written by Sia and children’s author Dallas Clayton).

The ‘bad sibling comes good helping the autistic one’ plotline isn’t exactly new (hullo, Rain Man), and there isn’t much more meat on the bones here. Where Music really stumbles, though, is in its fantasy musical interludes. Featuring impressive dancing from Ziegler and co, they’re designed to suggest the over-stimulation faced by Music – yet aren’t these breakout moments, with their hectic choreography, bright costumes and dazzling lighting, super-exclusionary of the very community the film is trying to represent? The songs themselves are forgettable: odd, given the number of bangers Sia has pumped out for herself and others.

The cast does serviceable work: Hudson gives a luminous turn, and there’s a welcome appearance by Hamilton star Leslie Odom Jr as Zu’s helpful neighbour. Celebrity friend cameos include Juliette Lewis and Henry Rollins, and Sia herself pops up at one point. But it’s comedian Tig Notaro who steals the show. She's glimpsed several times on television screens as a kids’ TV presenter who looks thoroughly bored by her gig. You might wish you were somewhere else too.

Music is in Australian cinemas now, and available to stream in the UK Feb 15.