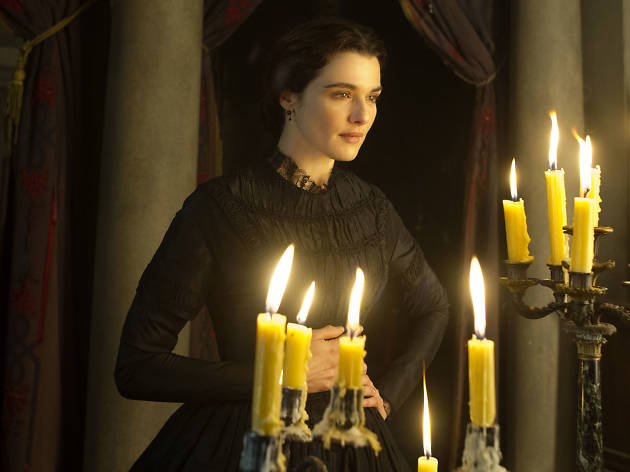 The female of the species is more deadly than the male. Is she really? The heroine of Daphne du Maurier’s 1951 novel is suspected of being a poisoner – a black widow who’s bumped off her husband. But the real killer in Du Maurier’s tale of obsessive love in the Victorian era is the claustrophobically adoring men who want to control Rachel and maintain patriarchal power over women. This clever, well-acted adaptation, written and directed by Roger Michell (‘Notting Hill’), is possibly a little too elegant, all bonnets and breeches and puffy shirts, but it does nail the spirit of the novel.

The setting is squally Cornwall, where orphan Philip (Sam Claflin) has grown up as the son and heir of his uncle, Ambrose, a bachelor who marries a distant cousin, Rachel (Rachel Weisz), while abroad. Soon after the wedding, Ambrose’s letters take a turn for the crazy, accusing Rachel of poisoning him. When he dies, Philip suspects Rachel. The trouble is, he falls head over heels as soon as he claps eyes on her.

Like the book, the film is narrated by Philip, so we see Rachel through the filter of his possessiveness. Claflin is excellent, portraying Philip as an untrained puppy, sweet but impulsive and bad-tempered. He’s a child playing at grown-ups. He wants to marry Rachel. Why would she refuse him? He’s horrified by rumours of her promiscuity but at the same time desperate to get her alone in a soggy field, the hypocrite.

Is Rachel a proto-cougar or a victim of misogyny? Weisz says enough with her eyes to let you know whose side she’s on. This is a fresh and un-stuffy period drama mostly, but it could have done with a pinch more danger.

Director:
Roger Michell
Cast:
Rachel Weisz
Sam Claflin
Holliday Grainger
You may also like
Popular movies
We know this city. Do you?