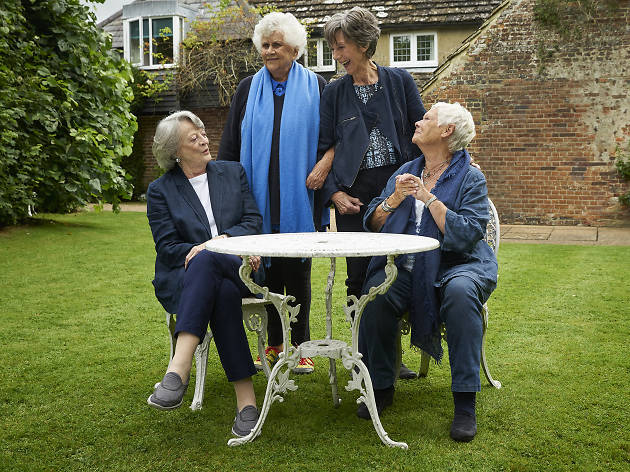 Four legendary British actresses get together to shoot the breeze in a joyful, revelatory doc.

Four old friends sit around and trade anecdotes, talking over one another and referring to people long dead. It might sound tiresome on paper, but it’s unfailingly fascinating because the four friends are Dames Joan Plowright, Judi Dench, Maggie Smith and Eileen Atkins. These giants of their profession have known each other since they were taking their first struggling steps onto the stage, and it shows in their easy camaraderie: Dench, the first to be Dame'd, called Smith and assured her, ‘Don’t worry, you can still swear’.

The group is blisteringly smart and long past the point of giving two hoots about the world’s opinions. Plowright is drily funny, Smith spiky, Dench sharp and Atkins wry, as they tell well-worn stories about their husbands and their hearing aids, the jobs they can barely remember and the lines they can never forget. Stage fright proves to be a common thread, even for the seemingly indefatigable Smith. Atkins says, ‘On the way to the theatre I always think, would you like to be run over right now? And I only just came down on the side of no.’ The others nod in recognition. Looks, too, are a theme: they all felt scared at the prospect of playing Cleopatra (‘Are you sure you want a menopausal dwarf?’ asked Dench when her turn came) and Plowright’s own mother told her she was ‘no oil painting’ (her oil painting sits behind her in the shot).

There’s an edge of melancholy, a sense of regret and loss that they barely try to hide about everything the years have taken, but few sombre moments are allowed to stand without someone else briskly breaking the mood. Director Roger Michell shows the edges of the film crew, to frame what’s real and what’s not, and even sneaks in a joke over the credits. But for the most part he just stands back and lets these extraordinary actors speak – and that’s more than enough.