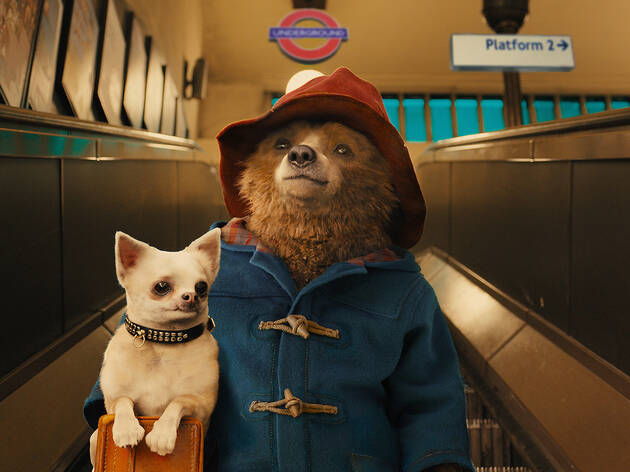 Anyone with fond memories of the books or a dusty Paddington Bear sitting on a shelf in their childhood bedroom can rest easy: this first-ever movie take on Peru’s furriest export is a cuddly, thoughtful triumph.

But not too cuddly. The beauty of this winning film from ‘Harry Potter’ producer David Heyman and writer-director Paul King (‘The Mighty Boosh’) is that it’s charmingly simple. But it also offers a sharp modern spin on Michael Bond’s London-set stories without being cynical. For kids, it’s fun, fast and sweet. For adults, it’s a parable of immigration: the story of a big-eyed outsider having his hopeful dreams challenged by the realities of the British capital. Fantasy? What fantasy?

The basics are the same: a small bear with a Marmalade habit is found at Paddington station and adopted by the nice middle-class Browns; hairy chaos and family bonding ensues. But the framing is new. There’s an ‘Up’-style preamble in Peru, sad and funny, that deals with Paddington’s aspirations to be British: ‘They will not have forgotten how to treat a stranger.’ The early mishaps when he’s taken in by Mr and Mrs Brown (Hugh Bonneville, Sally Hawkins, both excellent) and their kids are straight out of Bond’s books – an overflowing bath, slapstick on the Tube. But the danger later on is all-new, as evil taxidermist, Millicent (Nicole Kidman, devilish), concocts a plan to stuff the bear. This high drama rubs a little awkwardly against the earlier knockabout larks. But seeing as Bond filled several books with tales that can be summed up as ‘Paddington tries to make toffee’ or ‘Paddington plays cricket’, it’s hard to criticise the plot for taking a turn towards the multiplex.

Also straight out of the books is grumpy neighbour Mr Curry (Peter Capaldi), but here he’s a Little Englander, clearly racist and worrying about the bear’s ‘jungle music’. Mr Brown starts out small-minded too, sniffing at Paddington’s ‘sob story’ and encouraging his family to ignore the bear on the railway platform as he’s ‘probably selling something’. The film is a quiet two-claws-up to xenophobia on behalf of our Peruvian friend.

Visually, it’s as if the ultra lo-fi look of the 1970s TV version has been given a once-over by Wes Anderson, and then given a polish by a more populist director. There’s also a welcome sense of timelessness: it’s set now (we see The Shard), and yet no one uses mobiles or the internet. The bear himself survives his CG makeover; he’s cute and a little ragged (and beautifully voiced by Ben Whishaw). In bringing this much-loved creature to life, ‘Paddington’ oozes care, as if King and Heyman have made the label around the animal’s neck their guiding motto: ‘Please look after this bear, thank you.’ If that’s the case, it’s job done. What a relief.