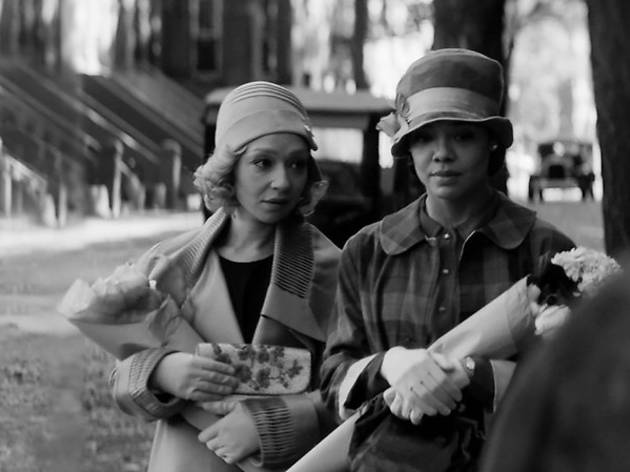 For her first film as a writer-director, Rebecca Hall, usually seen in front of the camera in films including Vicky Cristina Barcelona and The Awakening, has faithfully adapted Nella Larsen’s short 1929 novel about two Black women who have a chance meeting in 1920s Manhattan. The two women haven’t seen each other since they were kids in Harlem and both are now in their thirties and married, living superficially comfortable lives. But one of their circumstances is more immediately eye-opening: Clare (Ruth Negga) now ‘passes’ as white to almost everyone she meets, including her white husband, Jack (Alexander Skarsgård), whose brief appearance reveals him as a vicious racist (and underlines the danger of ‘crossing the color line’ in 1920s America – a reality which Passing explores with intimate, sensitive precision).

It’s Clare’s appearance, bumping into Irene in the tearoom of a fancy hotel – a delicate, gorgeously-handled encounter – that sets off the charge of Larsen’s story. But it’s Irene (Tessa Thompson) who Passing is really about: after that first meeting she resists, unsuccessfully, letting Clare into her settled Harlem domestic and social lives, where her husband Brian (André Holland) is a doctor and she’s a pillar of the neighbourhood scene. What Clare stirs in Irene – and what those stirrings say about her – is the engrossing central puzzle of the film.

It’s striking how close Hall has stayed not only to the atmosphere and spirit of Larsen’s story, but also the detail, give or take the odd nip and tuck, such as moving some scenes from Chicago to New York City. She also stresses the contemporary context of racial violence more than in the book, creating an ongoing conversation between Brian and his eldest son about lynchings in the South (echoing the modern ‘talk’ between Black parents and their kids; ‘I can’t breathe,’ says Irene at one point during a tense emotional situation, again causing today’s audiences to pause).

Passing poetically avoids being a neatly tied-up ‘issues’ film, despite what the premise may suggest: by which I mean, it doesn’t offer a case study, an interpretation and an easy resolution. It’s muted, quiet, suggestive, and it needs to be felt – to be filtered through your own experiences. Indeed, the very definition of ‘passing’ can be interpreted here as to do with race, of course, but also to do with broader realities and prejudices, with social standing, class, sexuality and gender. ‘We’re all of us passing for something or other, aren’t we?’ asks Irene of her sharp-tongued writer friend, Hugh (Bill Camp). The answers are there to be found, lurking in this wonderful film’s many glances, unspoken moments and entirely un-black-and-white interactions. Go explore.

In US theaters Oct 27. Launching on Netflix Nov 10.