Pirates of the Caribbean: Salazar's Revenge 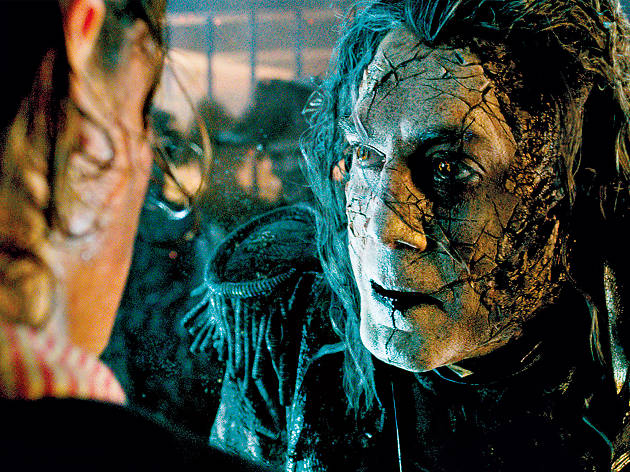 Despite cries to abandon ship, ‘Pirates of the Caribbean’ has set sail yet again. We’re on film five now and this really is swashbuckling by numbers, with prison altercations, ghost crews, hangman’s high jinks and battle scenes that could have been lifted from earlier movies. But ‘Dead Men’ is clearly an attempt to return to the good old days of the franchise, with an actual plot – however wishy-washy – and two new young things, played by Kaya Scodelario and Brenton Thwaites.

Scodelario is Carina, a ‘woman of science’, a self-taught astronomer hunted on land as a witch. She’s smart and strong, but the movie is too distracted by its own kookiness for her to really get interesting. Thwaites is Henry, the bland but honourable offspring of the even blander Will and Elizabeth – Orlando Bloom and Keira Knightley’s characters in the earlier films. Bloom even makes a brief, breathless appearance, his cheeks covered in cockles, but fans hoping for a meaningful reunion with Knightley will be left hanging.

Carina and Henry are on the hunt for Poseidon’s Trident, a mythical weapon that, if uncovered, has the power to break every oceanic curse – and therefore undo the plots of the movies that came before. Geoffrey Rush’s Captain Barbosa ends up being the most likeable character here; Javier Bardem’s pirate-hunter Salazar is all raspy one-dimensional revenge and let’s not even talk about that Paul McCartney cameo.

Unfortunately for everyone, Captain Jack Sparrow is still slurring and staggering around the Caribbean. Whatever charm and charisma Johnny Depp once had in this role is well and truly lost at sea. Even flashbacks to his youth – the origin story no one asked for, complete with CGI fresh-faced-ness – fail to reignite the love affair we once had with this hard-living pirate. Fourteen years after ‘The Curse of the Black Pearl’, he’s drunker, stupider and more of a lech. The jokes about women run aground, and watching him perve over Carina in her undergarments is repulsive rather than amusing. Avast, already!