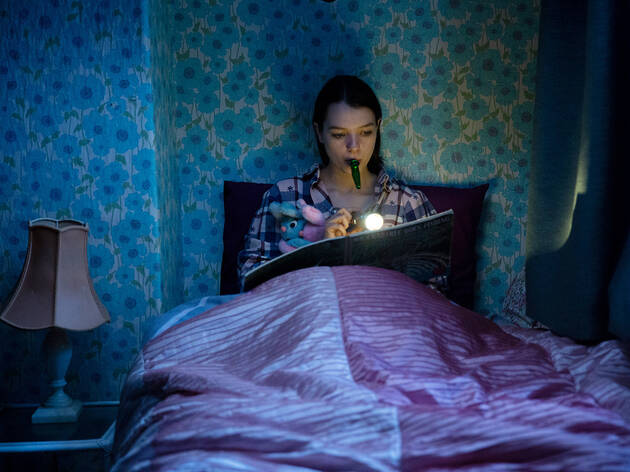 Quietly delightful, this gentle mid-’90s-set drama is lit up by a heart-breaking Esmé Creed-Miles.

‘Pond Life’ is one of those rare films that successfully make magic out of the mundane and turn trash into treasure. Similar to ‘Beasts of the Southern Wild’ or ‘The Florida Project’, it draws our focus to a largely deprived community where the troubles of the older generation are merely a backdrop to the brightness and imagination-fuelled optimism of youth.

That community is a former mining town near Doncaster during the summer of 1994, where the adults are at quiz nights down the Miners’ Welfare Club cracking jokes about Tony Blair, while their kids spend their time snogging obsessively, walking Fisher-Price toy dogs, trying to astral project themselves into their ex-girlfriends’ bedrooms or staring slack-jawed at the Wonderbra ‘Hello Boys’ ad. Then word of a huge carp in the nearby ponds brings a group of young friends together for a night-time fishing trip.

Adapted from a play by Richard Cameron (who also wrote the script) and directed by first-timer Bill Buckhurst, the film is firmly character-driven and gently dramatic, placing its biggest tragedy in the backstory and dealing only with the ripples that event created for a community that’s been gradually unravelling since the pit closures.

Via a series of interconnected, mostly short-but-sweet scenes, ‘Pond Life’ pulls together an ensemble of young characters, each trying to find their path in life, from the wistful Malcolm (Angus Imrie) to the displaced twentysomething Trevor (Tom Varey), to the girl he helps care for, the brightly off-centre Pogo (Esmé Creed-Miles).

As impressive as all the young actors are, it’s Creed-Miles who really stands out. Whether she’s wondrously viewing the world through sweet-wrappers rubber-banded to her head, or tearfully wolfing down lumps of carp bait during a low ebb, she portrays Pogo with such sensitivity she’ll melt your heart. On top of TV show ‘Hanna’ and 2017’s ‘Dark River’, this should confirm her ‘next big thing’ status. You could say she makes a splash.