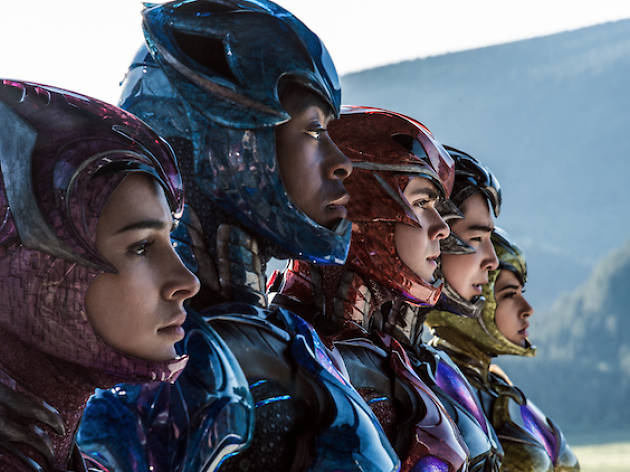 A bracing big-screen reboot for the beloved kids' TV series

“It’s morphin’ time!” fans will yell, as waves of light explode, color-coded armor creeps onto bodies, and tears of recognition are wiped away. Rarely has a franchise dominated childhoods as thoroughly as the ’90s-era live-action 'Mighty Morphin Power Rangers', devoured on TV and cemented with action figures and toys. Today’s grown-up kids aren’t ready for the reboot, but they should be: The movie knows to make playground fun out of the material.

Set against the suburban backdrop of California’s fictional Angel Grove, the story (for those not in the know) follows a rag-tag team of teens chosen to defend Earth from evil Rita Repulsa. What this 'Power Rangers' does—unlike the show—is explore the complexities of our core team: They’re imperfect but perfect enough to be selfless and save the world. Despite spending the majority of its running time with lead heroes Kimberly (Naomi Scott) and Jason (Dacre Montgomery), the main player of the group is autistic Billy (Me and Earl and the Dying Girl’s RJ Cyler), whose enthusiasm and charm are contagious.

Kudos to the movie’s subversive streak for using a great talent like Bryan Cranston to basically play a gigantic head (Power Ranger mentor Zordon). Bill Hader does justice by robot Alpha 5’s iconic squeals while Elizabeth Banks delivers an exaggerated yet powerful villain that should have hit the airwaves 25 years ago: she makes it look like a blast, while devouring gold (don’t ask—it’s part of her plan). Here, Rita takes a little time off from planetary domination to also indulge in Krispy Kreme. Priorities, my friends.

Even if you have mixed feelings about the new suits and other shortcomings, 'Power Rangers' will leave fans feeling sentimental. Whether it’s a well-timed placement of the show’s original theme song, cameos that only hard-core followers will notice (original Green Ranger Jason David Frank!) or the hint of a potential sequel, the film remains true to its TV origins and pays respect to its Japanese creators. Nostalgia has never felt so morphenomenal.