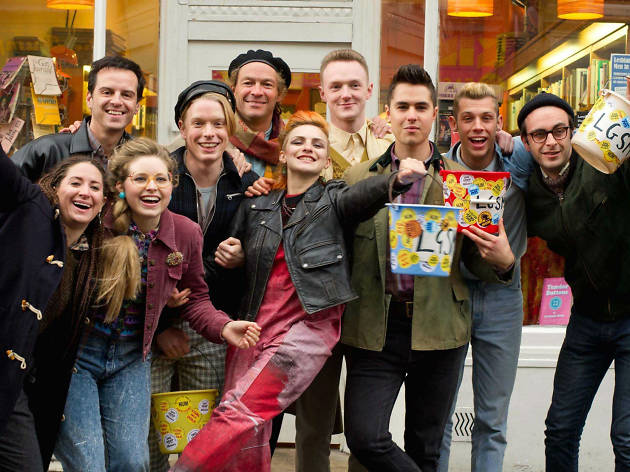 It’s the holy grail for filmmakers: to tell a story with something to say about our world that is also shamelessly entertaining, moving and funny. ‘Pride’ recalls how a small group of gay activists took a trip from London to rural South Wales in 1984 to lend their support to a beleaguered village during the miners’ strike. Their reasoning was that the miners were going through a struggle not so different to their own. And what joy and pain director Matthew Warchus and writer Stephen Beresford unearth as they detail awkward meetings that blossom into unlikely friendships and personal breakthroughs.

The ‘gays’, as the Welsh call them, are led by young Mark Ashton (Ben Schnetzer), loud and determined. Those at his side in Lesbians and Gays Support the Miners (LGSM) include barely out Joe (George MacKay) and a couple, actor Jonathan (Dominic West) and his more meek partner Gethin (Andrew Scott), for whom a return to Wales holds special meaning. An equally sprawling cast of Welsh characters includes Hefina (Imelda Staunton), Dai (Paddy Considine) and Cliff (Bill Nighy). Both ‘sides’ meet on various occasions, culminating in a raucous visit to London when Mark and his comrades organise a series of ‘Pits and Perverts’ fundraising concerts.

Warchus’s background is theatre – he directed ‘Matilda’ on stage – and what he cooks up here has all the drive and verve of a musical while there’s a dash of Ken Loach in the film’s knockabout camaraderie and, of course, politics, although ‘Pride’ wears the latter lightly. The beauty of Beresford’s script is that it champions solidarity while never ignoring solo experience; helped by a strong cast, he finds moments of truth for so many characters in some very effective brief scenes.

That’s not to say ‘Pride’ is especially daring; but for a defiantly mainstream film, it’s free of coyness or embarrassment and unashamed of shouting about the powers of solidarity, friendship and empathy. It’s a joyous film, full of love and warmth but unafraid to admit that with sticking out your neck comes struggle and sorrow. Truly lovely.