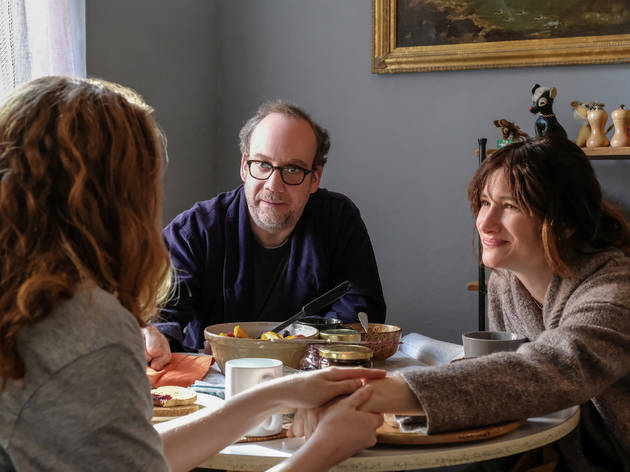 Antiseptic hallways, glib doctors and tense waiting rooms (where every couple seems to be facing down the unthinkable) make up the early goings of 'Private Life', a movie about the heart-wrenching calculations of in vitro fertilisation. Call it a major medical miracle, then, that this subject has found writer-director Tamara Jenkins – last seen with 2007's scalpel-sharp 'The Savages' – who transforms this crucible of disappointment and colossal financial strain into something close to a riot, infused with courage and the same dark laughs as last year's girlfriend-in-a-coma dramedy 'The Big Sick'.

Jenkins, whose taste in adventurous actors is peerless, here gives us Paul Giamatti and a revelatory Kathryn Hahn, huggable and frazzled in every frame, as Richard and Rachel, two bickersome fortysomething East Village bohemians who venture out of their rent-stabilized apartment to combat babylessness on every front. We hear their marriage is a shambles, that they're 'fertility junkies' and 'gambling addicts', but if anything, their bond is unusually honest – that kind of simpatico urban relationship in which screaming bouts on the street indicate an inability to be false. These are verbally unencumbered theater people who, even at their grumbly lowest, can liken their situation to a Wendy Wasserstein play or 'The Handmaid's Tale'.

Into their sad parade of tush injections and pregnancy dead ends comes Sadie (the wonderfully open Kayli Carter), their 25-year-old step-niece, a neurotic Bard dropout who hasn't launched. (The character feels like an older cousin to Natasha Lyonne's sarcastic teen in Jenkins's feature debut, 'Slums of Beverly Hills'.) She moves in with Richard and Rachel to find herself, and it's here that 'Private Life' becomes painfully bittersweet: The three of them make up a perfect family, supportive and garrulous over taco-truck takeout. When the moment finally comes for Sadie's 'art parents' to share their secret wish for a donor egg with her, Jenkins delivers her movie to a rare, magnificent place of sympathy via three knockout scenes. First comes a near-attempt to breach the subject over breakfast, the good vibes too sweet to ruin. Then there's a bolder conversation (your heart leaps into your throat when Sadie, looking for a purpose, agrees to help them) and finally, a ruinous Thanksgiving toast amid Sadie's scowling parents that joins the ranks of classic onscreen holiday fails.

Perhaps unavoidably given its DNA, 'Private Life' sometimes feels like a Woody Allen film (he even briefly touched on this topic in 'Hannah and Her Sisters', which is fine cinematic company to be in), and Jenkins occasionally leans too heavily on the jazz music. But the riskiness of her set-up, one that blooms with complications and rawness, is a thing of adventurous beauty. Her film is a gift to those people who discretely flinch at every dinner party and kid-celebratory anecdote. Even if that audience is not you, you may still resonate with a couple who strays so far from its original spark that it comes close to dying out. This is a story you'll want to watch to its exquisitely compassionate ending: a wordless final-credits aria that, as with 'Michael Clayton' and 'Call Me by Your Name', speaks volumes about the nature of minute-to-minute emotional survival. Genetics be damned, there's always so much to give.