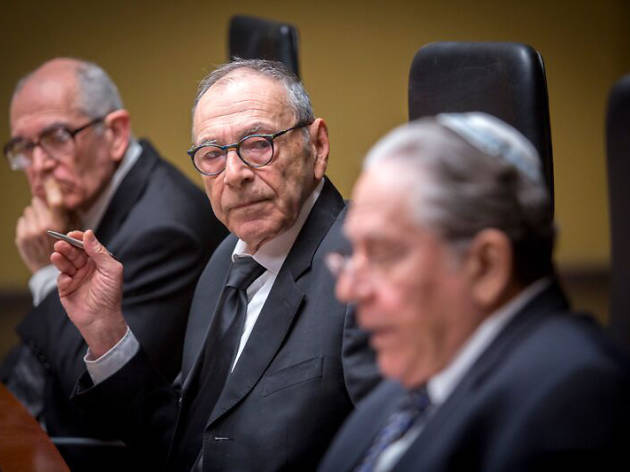 This deadly serious, sombre Israeli film from Amos Gitai (‘Free Zone’) marks 20 years since the assassination of Israeli PM Yitzhak Rabin, resurrecting and reconstructing the air of fanaticism and zealotry that led to his death. Using a lively and enlightening mix of drama and doc techniques, Gitai exhumes the mood of fear, anger and delusion that existed among religious extremists and others opposed to the mid-1990s Oslo Accords and that led to Rabin being shot by a Jewish law student, Yigal Amir (Yogev Yefet), in November 1995 as he left a rally.

‘Rabin, The Last Day’ dramatises the murder, as well as replaying, with actors, various meetings, interrogations and inquiries either side of the event – including a gathering of Jewish extremists at which a psychologist ludicrously concluded that Rabin was a schizophrenic. Yet the film puts most emphasis on the Shamgar Commission set up after Rabin’s death to rule on whether any ‘operative acts of negligence’ were involved. Gitai strongly, if indirectly, hints that there may have been a deliberate lapse in the security around Rabin before he was shot. But he leaves that question open.

That’s partly because only some of the commission’s findings were made public and nothing has ever been proved. But it’s surely also because Gitai is less concerned with getting bogged down in conspiracy theories and more concerned with honouring the importance of facts over faith and in highlighting a culture of sectarian violence and extreme belief that he believes still persists in Israel. Current Israeli PM Benjamin Netanyahu is an increasing presence as the film progresses, both in archive footage as he strongly denounces Rabin in the 1990s and in posters for the recent March 2015 election, at which he was re-elected. If there's a villain here, it's him. As character assassination by association goes, ‘Rabin, The Last Day’ is quiet and lethal.