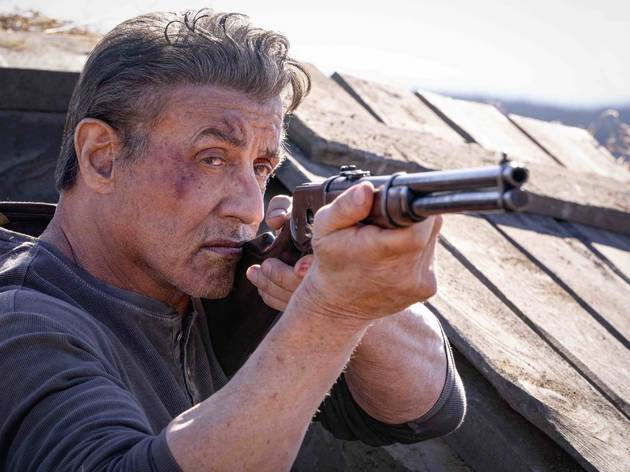 Thirty-seven years after his first outing, John Rambo signs off with a grim and eye-poppingly xenophobic kill fest.

Sometimes, while watching ​‘​Rambo: Last Blood’ – ​maybe it’s when our hero uses his bare hands to tear the still-beating heart out of a Mexican rapist’s chest​ – ​you’ll ​ponder that it didn’t have to end this way. Sylvester Stallone’s John Rambo, first an unappreciated Vietnam vet, then a one-man army, always fought on his own terms. Even when he rolled with the ​‘gallant people of Afghanistan​‘ (as 1988’s​ ‘​Rambo III​‘​ was dedicated), he was never anyone’s mouthpiece. Now, Stallone might as well be wearing a MAGA cap. The new film’s script, partly credited to its star, is a breathtakingly racist compendium of Trumpian talking points: Rambo, these days a humble Arizona rancher with an extensive weapon collection, does battle with an invading horde of drug dealers who make the thugs from ‘Sicario’ look like a mild nuisance.

Oh, right­​ – ​they’re also sex slavers, responsible for abducting Rambo’s college-bound niece, Gabrielle (Yvette Monreal), hooking her on smack and pimping her out. Just when the movie’s symbology couldn’t get more obvious, the camera lingers on that border wall: a porous defense, all the better for Rambo to lure his enemies onto his home turf for a Doors-scored climax of ridiculously over-the-top gore. Is there any satisfaction in seeing the icon back in action?

Director Adrian Grunberg (​‘​Get the Gringo​‘​) stages the violence clumsily, often botching the kill moments with frenetic cutaways. None of the care that Stallone imparted to his ‘Rocky’ reboots  –​‘Rocky Balboa​’ (which he directed)​, ​‘​Creed​’​ and ​‘Creed II​‘​ (or produced) – is in evidence; it’s as if he is admitting that the ​‘​Rambo​‘​ movies were always trash. He may not be the best custodian of his own legacy. Graying, splotchy and barely intelligible, Stallone turns in a self-negating performance, just as ugly on the inside.​