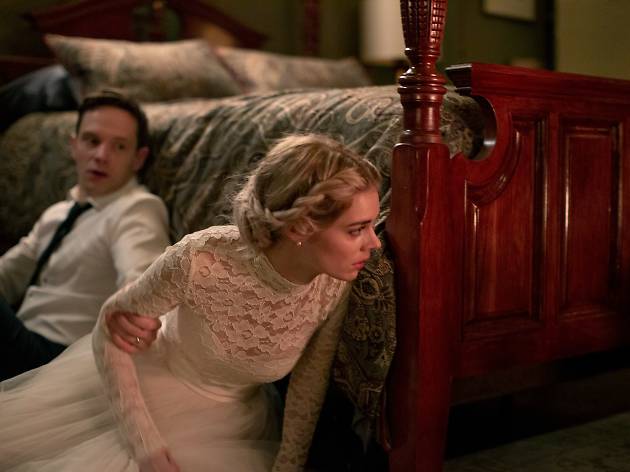 Horror movies will always make room for rich people behaving badly. Frankly, we could use a sharp one of these right now, ‘American Psycho’ or ‘You’re Next’. Apparently that’s not in the cards: Instead, we get the splattery, not-so-clever ‘Ready or Not’, in which the snobby heirs to the Le Domas gaming fortune reveal themselves, fairly early on, to be murderers and then closet Satanists. That’s not such a surprise – the movie’s idea of a wink is a pan across a shelf with some of the Le Domas’ biggest hits, board games with names like Family Ritual and Secret Council.

Shame on screenwriters Guy Busick and R Christopher Murphy for not letting us see one of those titles in dice-rolling action. The clan assembles for a heavily armed version of hide-and-seek, in which their newest member, the just-wed Grace (Samara Weaving), first plays along as their quarry, but soon realizes that she’s in mortal danger. (It takes an accidentally slain maid or two to make the point.) If there’s a reason to see ‘Ready or Not’, it’s Weaving, awakening from her Cara Delevingne – like ennui and transforming into a capable Rambette, tearing the fringe off her wedding dress and flexing her right to bear arms. (‘She’s a little blond twig!’ fumes the dad, watching his spawn go down one by one.) You get no points for correctly guessing that Grace’s husband is one of the shits.

Codirectors Matt Bettinelli-Olpin and Tyler Gillett, members of the resourceful indie collective Radio Silence, are more comfortable with zany humor than with manufacturing actual scares. That means they’ll overindulge in a Tchaikovsky-loving butler who has a thing for singing in his car. But they’re becoming real filmmakers, laboring to give ‘Ready or Not’ a distinct visual signature: yellowish, sconce-lit, wood-paneled and frenetic. (They also plunge Weaving into something called the goat pit, which earns them major points on the yuck scale.) As games go, this one’s a little too easy to outfox, but it’s worth playing if you need a quick diversion, or if the chess moves of ‘The Favourite’ felt overly vicious – ‘Ready or Not’ is pure checkers.