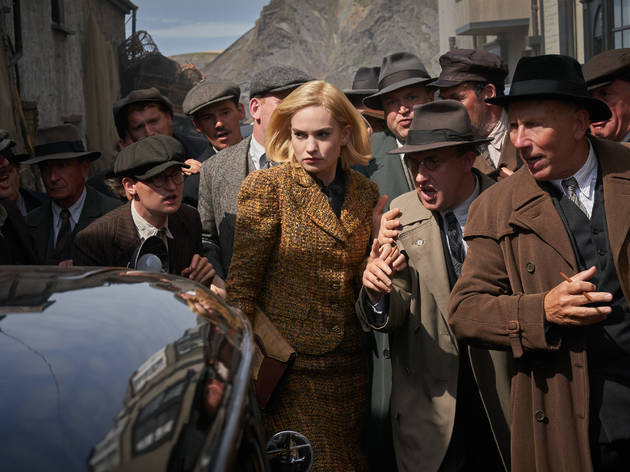 Something goes missing in this glossy take on Daphne du Maurier’s psychological puzzlebox Rebecca – and it’s not Rebecca. Ben Wheatley, that auteur of all things British, savagely comic, dog-offing and usually carved from the meagrest budgets, goes upscale but leaves his signature touch behind in a treatment that doesn’t begin to invite comparisons with the 1940 Hitchcock Best Picture winner. It’s gluten-free Wheatley: bland and generic. Even the pooch gets away unscathed.

Not that we were expecting Alice Lowe and Steve Oram to pop up as gothic literature’s hastiest marrieds, Mrs and Maxim de Winter but they’d have been a lot more fun to watch than the oh-so-earnest duo of Lily James and Armie Hammer. Clad in suits significantly more charismatic than him, Hammer’s Maxim is a stiff and uninvolving presence when he should be rakish and mysterious. James isn’t a whole lot more compelling. The pair strain for chemistry and psychological depth and don’t find a lot of either.

As du Maurier’s source material demands, James’s character remains unnamed. She’s introduced in Monte Carlo as an assistant to a gauche American tourist (Ann Dowd, almost as terrifying as in Hereditary), but is soon stolen away by newly widowed Maxim. She’s whisked to his Cornish coastal pile, Manderlay, for married life, walks by the seaside and assorted torments from psycho-housekeeper-from-hell Mrs Danvers (Kristin Scott Thomas, lacing the imperious menace with some powerful ‘why am I even bothering?’ energy as she toys with her quarry).

Shot by long-time Wheatley cinematographer Laurie Rose, it’s all very handsome, with lots of shots of posh-porn County Life interiors. It has one advantage over the Alfred Hitchcock version in that it was shot in England rather than on a Hollywood sound stage, but that mostly translates into cutaways to crashing waves and Downton Abbey-ish shots of vintage cars vrooming around the countryside. Hitchcock was meticulous in decoupling Manderlay from its surrounds, but that sense of isolation, so critical in confining Mrs de Winter in her gilded prison, is missing here.

The Ben Wheatley we know and love from off-kilter gems like Kill List and Sightseers does reappear briefly for a Manderlay ball scene that’s framed as a trippy nightmare for his heroine. James spins, anguished and anxious, between revellers as her husband seethes over some perceived slight. You never feel for her more as in this moment: a woman whose own sense of identity is washing away beside the seaside. The rest is a bit of a damp squib.

In UK cinemas now and on Netflix worldwide from Fri Oct 23.

Recommended: The 100 best thrillers of all time.