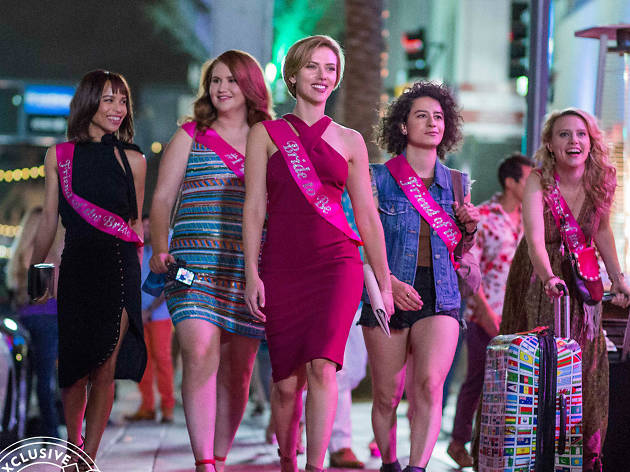 This skin-deep ensemble comedy about a hen party gone horribly wrong should have set its brilliant cast free.

Hen parties – and plenty of stag dos, I’ve noticed – are never just about the booze and the partying. There’s always that slightest twinge of jealousy, a bruised hint of abandonment, a recklessness about to spin out of control. So it goes with the tonally uneven 'Rough Night', a half-borrowed comedy that quickly kicks its one night of female carousing into the realm of terrible decisions. You can feel the film’s desperation right under the surface: the script (by 'Broad City' alumni Lucia Aniello and Paul W Downs) wants to join the company of 'Bridesmaids' or 'Bachelorette'. But instead it settles for a coke-fueled mania that doesn’t cohere into anything apart from a handful of funny moments.

The film's quintet of stars are dazzlers stuck in a middle gear; still, watching them play off each other is its own kind of pleasure. Scarlett Johansson is Jess, an awkward state-senator candidate who’s currently losing in local polls to a competitor who's intentionally deploying dick picks. Taking a break from the combat, she gathers her college friends, including clingy Alice (Jillian Bell), secretive Blair (Zoë Kravitz), loud-and-proud Frankie (Ilana Glazer) and her semester-abroad confidante, Pippa (Kate McKinnon, stealing another summer movie with an outrageous Aussie accent).

The Miami Beach debauchery is a little ho-hum-'Hangover', but it’s still more likable than the film’s ice-cold plunge into unwitting manslaughter when a hired stripper accidentally gets brained during his routine and the women panic, trying to cover it up. That’s the same premise of 1998’s 'Very Bad Things', which really dove into male entitlement. Here, it’s a mere bump on the road to more slapstick moments involving corpse disposal, sex-crazed neighbours and cleaning up the evidence. Orchestrating a gender reversal on this concept isn’t especially liberating; you might actually get more laughs out of the cutaways to the lame bachelor party of Jess’s fiancé, where sensitive men get 'wild' at their private wine tasting. Given its multitalented cast, 'Rough Night' should have committed to the darkness – originally, the screenplay’s title was 'Move That Body'.