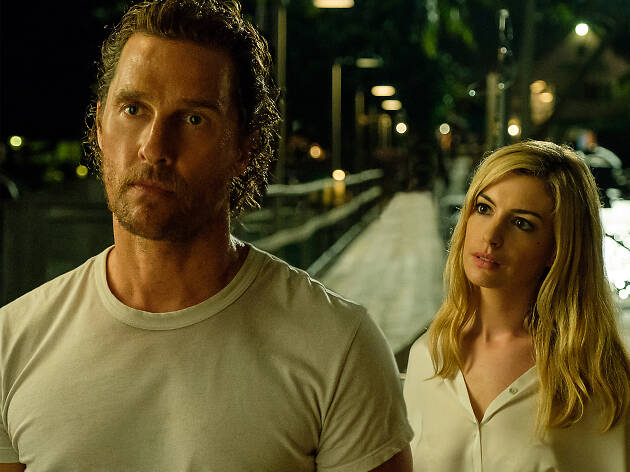 The McConaissance is definitely over: Matthew McConaughey’s midcareer stretch of ambition that culminated with smart, wily turns in ‘Magic Mike’, ‘True Detective’ and ‘Dallas Buyers Club’ has slackened. Now he does weird car commercials and ‘Serenity’, a stupefyingly awful film that actors with fewer opportunities would have likely passed on, laughing. In a way, it’s a throwback to McConaughey’s rascally beach-bum era, never that compelling to begin with. He plays Baker Dill, a bitter fishing-boat captain for hire on an island off the Florida coast, a guy who indulges fat tourists who dream of catching the big one. Days, you sense, have become years for Baker, and he isn’t expecting his ex-wife, Karen (a bottle-blond Anne Hathaway, miscast), to sashay onto his slip, beguiling him with a plan to ice her new husband, an abusive jerk.

There’s a way to make this kind of trashy noir work beautifully – was ‘Wild Things’ director John McNaughton somehow not available – but ‘Serenity’ is too blandly generic to stick its snout in the muck and luxuriate, barring the occasional jail-baity line of dialogue from Hathaway (‘You said I was finally old enough,’ Karen whispers, reminiscing). But there’s a reason for the blandness, for Baker’s world’s-greatest-dad mug and every other laughable cliché of writer-director Steven Knight’s screenplay, and it’s taking tons of restraint not to spoil it for you. This is the type of twist that turns a mere mediocrity into a January stinker that clears out multiplexes faster than rotten meat in a refrigerator.

Suddenly we’re trapped in a movie that wants to be more like ‘Interstellar’, one that unravels the more you think about it. Riotously, McConaughey plays it like the half-baked sci-fi it is: ‘Why has the creator changed the rules?’ he drawls in between rum swigs, his every line reading an instant meme in the making. Okay, maybe there’s still time left on this McConaissance after all.