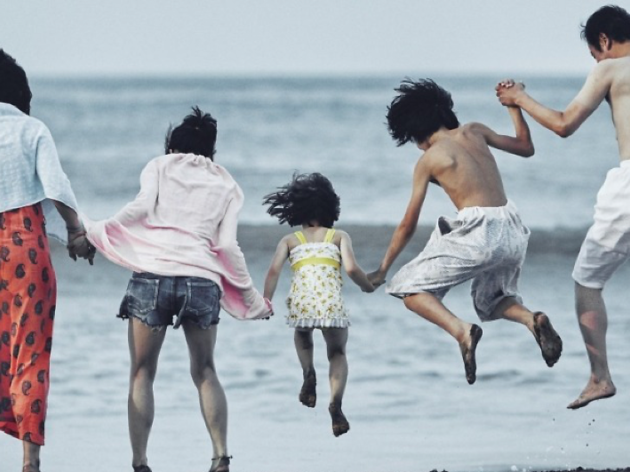 Hirokazu Kore-eda reinforces his status as a modern-day Ozu with another rich humanist drama.

While widely regarded as one of the finest Japanese directors working today, Hirokazu Kore-eda has a somewhat uneven body of work to his name, notwithstanding the fact that his measured pacing, gentle tone and uncluttered visuals make his style unusually distinctive. His best films, almost without exception, have been those about families – real or surrogate – so that titles like ‘Nobody Knows’, ‘Still Walking’ (arguably his masterpiece), and ‘Like Father, Like Son’ have earned him something of a reputation as an heir to the great Yasujiro Ozu.

If ‘Shoplifters’ isn’t quite up there with his greatest work, it’s nevertheless very satisfying. The focus this time around is not on a real family but on a group of impoverished people of various ages living together in a run-down hovel and trying to get by the best they can. Shoplifting is practised by a middle-aged construction worker and the young boy he treats (and has trained) like a son; the labourer’s wife works on a job-share scheme in a laundry; another young woman performs in a  peep-show parlour; while the eldest of the makeshift ‘family’ lives off her former husband’s pension and other more mysterious sources of income. It’s not an easy existence, so when a small girl is found and brought home, she’s initially regarded as yet another unwelcome mouth to feed - till the scars on her body convince everyone that perhaps she ought not be returned to her mother and her lover.

The film rewards on a number of levels. First, in depicting, with its fairly plotless narrative, the daily routines of the various characters, it not only offers insights into the shortcomings of Japan’s socio-economic system – these people have to resort to theft as a supplement to their work income simply to survive – but into the ways people tend to adapt to any circumstances; far from an exercise in miserabilism, it shows how the various members of the group find and take simple pleasure in each other’s company, in the changing seasons, and in a sense of community. At the same time, however, for all its sweetness the film never romanticises: the group is not, in the end, a real family with blood-ties, and that may make a difference in terms when things get even tougher. Just as it looks at the ethics of petty crime, so it explores the limits of love and loyalty.

Typically for Kore-eda, the generally becalmed, affectionate tone builds slowly towards scenes that are finally deeply moving without ever being mawkish. Boasting excellent performances all round (with the writer-director once again demonstrating his expertise with children), ‘Shoplifters’ is another charming, funny and very affecting example of Kore-eda’s special brand of tough-but-tender humanism.