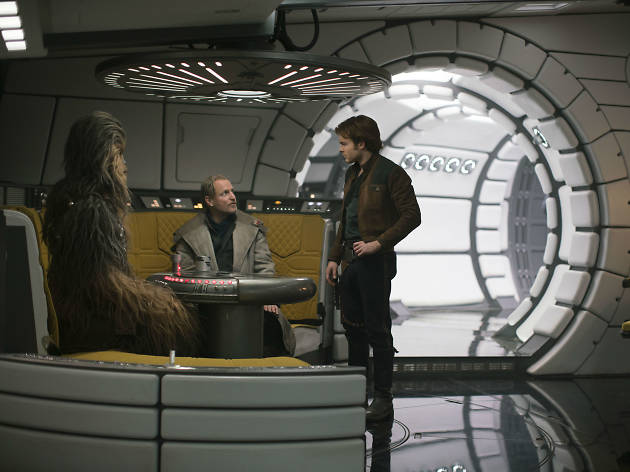 Alden Ehrenreich fills the biggest flying boots in the movies in a verve-filled ‘Star Wars’ spin-off.

You definitely wouldn’t have bet your spaceship on this Han Solo spin-off movie being anything other than a hunk of junk. The ditching of original directors Chris Miller and Phil Lord (‘21 Jump Street’) – which was well published and just shy of acrimonious – only complicated the already onerous task of bringing a new take on the beloved Harrison Ford character to the screen. Somehow, though, the pair’s replacement, Ron Howard, has come through with a frisky space caper that zips along like a speeder on a bed of air. It’s far from perfect, but it’s much better than it has any right to be.

It opens back in the streetwise early days of Han (Alden Ehrenreich) in the ‘putrid sewer’ of his home planet Corellia, before skipping forward, via a hair-raising stint in the Imperial army, to a team-up with a colourful band of thieves led by Woody Harrelson’s Tobias Beckett and his wife Val (Thandie Newton). Their first heist involves boosting starship fuel at the behest of sinister playboy Dryden Vos (a scene-stealing Paul Bettany, bearing scars like he’s just faceplanted a waffle iron). The sequence is a rush, and the first of a few reminders that the man who made ‘Apollo 13’ knows how to cut between outer space action and claustrophobic cockpits.

Donald Glover’s shifty but seriously charismatic Lando is a joy, as is the hilarious Phoebe Waller-Bridge as his seriously woke droid, L3-37. At one point, the mouthy ’bot launches a ‘Droid Lives Matter’-type protest that’s both oddly current and very silly indeed. Of course, Han’s burgeoning Wookie-mance with Chewie gets plenty of airtime too.

Inevitably, some of the box-ticking elements of ‘Solo’ fall flat. Unless you really want to know how Han got the ‘Solo’ part of his name – and trust us, it’s not that thrilling – all the Hansplaining is mystique-sapping at times, especially when nestled in an already exposition-heavy script (a working knowledge of intergalactic fuel rods is definitely helpful here). ‘Solo’ is at its best when it’s uncoupled from all that heavy lifting, just crammed in a cockpit with its likeable cast and shooting for the stars.

Want more insider goss? We spoke to the 'Solo' cast, including Donald Glover, Phoebe Waller-Bridge, Woody Harrelson and more. Watch it below.