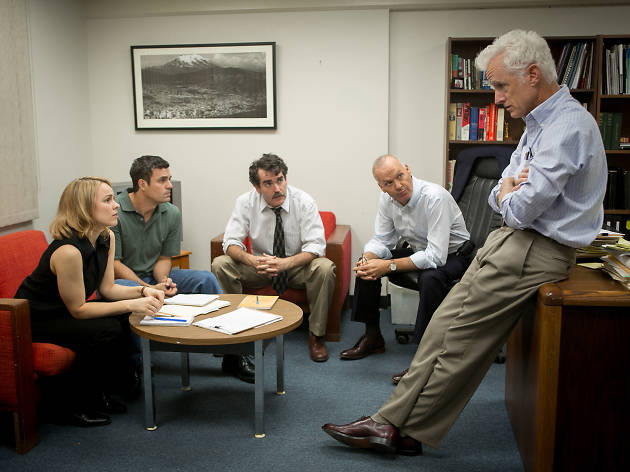 ‘This is Boston,’ says Stanley Tucci’s seen-it-all victims’ lawyer to a reporter in ‘Spotlight’, echoing that famous last line in ‘Chinatown’: ‘Forget it, Jake, it’s Chinatown’. But forgetting isn’t an option sometimes: ‘Spotlight’ calmly and powerfully traces the work of a group of dogged Boston Globe journalists in 2001, who were determined to expose the systematic cover-up of abuse in the local Catholic church. ‘Spotlight’ is the story behind the story, and it’s the film equivalent of reading an especially thrilling New Yorker article: ruthlessly detailed, precise and gripping but never brash or overemotional.

Tom McCarthy is an unfussy, low-key director (‘The Visitor’, ‘The Station Agent’), and that style suits ‘Spotlight’, which is all muted colours, linear storytelling and unobtrusive camerawork. It allows the ensemble cast to shine without showing off: Michael Keaton, fresh from ‘Birdman’, makes his second, perhaps better, comeback as Bostonian Robby Robinson who heads up the paper’s investigative team, Spotlight; Liev Schreiber is the paper’s new editor, an outsider and Jewish in a heavily Catholic city; Mark Ruffalo and Rachel McAdams are reporters on the front line, knocking on doors and digging out documents. Ruffalo is perhaps the loudest presence: nervy, energetic and prone to the odd outburst in a film otherwise mercifully lacking those moments.

This is ‘All The President’s Men’ for the ongoing exposure of the horror of priestly paedophilia. Yet it’s a more subtle, damning film for implicating the media – as much as the church, the courts, the legal profession and other Boston institutions – in the systematic, wider cultural cover-up it describes. These journalists are good, hard-working and principled, but the film falls short of making them heroes, and crucially doesn’t allow media mechanics to over power the true nightmare of the real-life experiences behind their story. There are just enough testimonies here and encounters with victims to make the human side of the story crystal clear without losing focus on the bigger picture of establishment corruption. It’s that all-too-rare beast: a movie that’s both important and engrossing.